A “shining” example of interstitial keratitis

Find articles by Michael A. Ullman

We present a case of interstitial keratitis, presumed to be herpetic, with a striking clinical appearance. A 67-year-old woman was initially diagnosed with viral conjunctivitis and ocular hypertension OD with conjunctival injection and elevated intraocular pressure (IOP). She later presented with a ‘spot on my right eye’ and, after referral, was diagnosed with presumed herpetic keratitis. She was treated with oral valacyclovir and topical prednisolone acetate. The cornea improved, leaving radiating lines in the corneal stroma. This case illustrates an unusual appearance of presumed herpetic stromal keratitis.

Globally, there are an estimated 1,000,000 new cases of ocular herpes simplex keratitis per year.1 Furthermore, in the United States, one in three individuals will experience herpes zoster during their lifetime, approximately 7.9% of these cases being herpes zoster ophthalmicus.2 We present a case of interstitial keratitis, presumed to be herpetic, with a striking clinical appearance.

A 67-year-old woman with a history of renal cell carcinoma presented to her primary ophthalmologist with conjunctival injection and blurred vision OD. She was diagnosed with viral conjunctivitis and ocular hypertension OD and treated with a 1-week course of tobramycin/dexamethasone QID OD and brimonidine/timolol BID OD. One week later, she had persistently elevated intraocular pressure (IOP) OD and was diagnosed with occludable angles OU. She was treated with bilateral laser peripheral iridotomies with improvement in her IOP and symptoms. Six months later, she presented to her primary ophthalmologist complaining of photophobia, decreased vision OD, and a ‘spot on my right eye’. The provider noted an ‘intrastromal vascular growth’ OD and referred the patient to us for evaluation.

On our examination of the right eye, the best-corrected visual acuity (BCVA) was 20/40 and IOP was 18. The nasal cornea of the right eye was very thickened and had both an infiltrate and a dense patch of stromal vascularization, giving the involved quadrant of the cornea a ‘salmon’ colored appearance. Radiating lines were also present, giving the central edge of the corneal lesion a ‘sunburst’ appearance (Fig. 1). Sensation was absent over the affected region of the cornea. Anterior segment ultrasound demonstrated a thickened peripheral cornea with iridio-corneal touch (Fig. 2). Given the appearance, loss of corneal sensation and history of an acute IOP rise in the affected eye we made a diagnosis of herpetic stromal keratitis. The patient was started on valacyclovir 1g PO TID and prednisolone acetate 1gtt QID OD. 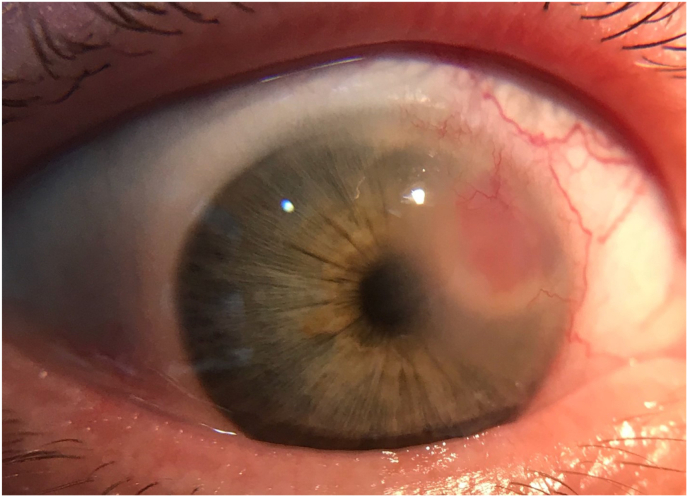 External photograph of the right eye showing intra-stromal pink lesion with blood vessels. (For interpretation of the references to color in this figure legend, the reader is referred to the Web version of this article.)

At her one-month follow-up, the patient noted an improvement in her vision and photophobia. BCVA was 20/30 OD and IOP was 18 OD. The corneal infiltrate, swelling, and neovascularization had improved, but the radiating lines (now ‘steel wool’ in appearance) in the mid stroma were more distinct (Fig. 3). Over the next two months, the patient continued to improve during a monitored reduction of valacyclovir and prednisolone acetate. 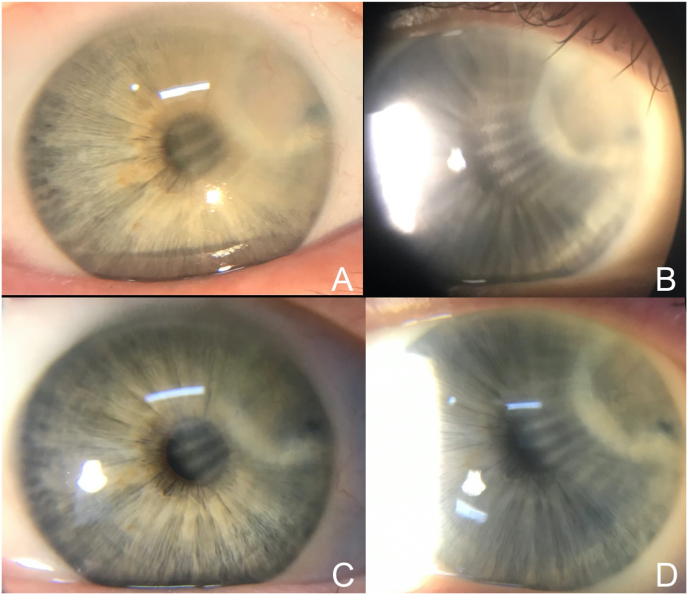 This case illustrates an unusual appearance of presumed herpetic stromal keratitis. The radiating lines in the corneal stroma may be a form of post-inflammatory lipid keratopathy and may represent unesterified cholesterol crystals and neutral fats deposited in the corneal stroma.3 The dense corneal vascularization, massive (but reversible) corneal edema and ‘sunburst’ appearance have all been described in herpetic keratitis. The combination of all three made for an unusual and striking clinical presentation. Loss of corneal sensation and a history of unilateral acute ocular hypertension are valuable clues in evaluating interstitial keratitis.

The patient consented in writing to the publication of this case and associated images.

Authorship: All authors attest that they meet the current ICMJE criteria for Authorship.