Treatment of juvenile idiopathic arthritis (JIA)-associated uveitis necessitates the use of long-term corticosteroids or immunosuppressive agents, each of which poses their own significant side effect profile. Initial treatment requires intensive topical glucocorticoids, with a step-up approach employing immunosuppressive agents for those cases with poor response or high-risk complications such as macular oedema. To date, there is minimal evidence to support a specific approach to such complicated subgroups. We present the first case to successfully employ the 0.19 mg fluocinolone acetonide implant (ILUVIEN®, Alimera Sciences, Hampshire, UK) as a novel device for prolonged intravitreal administration of disease-modifying agents for patients with JIA complicated by uveitis.

In this case, the 0.19 mg fluocinolone acetonide implant provided safe and effective long-term treatment of JIA-associated uveitis and secondary CMO. This potentially offers an alternative approach to complex cases that show good response to short-term corticosteroid use.

Uveitis poses significant long-term complications including permanent visual impairment [1]. Whilst the majority of paediatric cases are idiopathic in nature, infectious and autoimmune aetiologies are also implicated as potential disease sources. Of these conditions, juvenile idiopathic arthritis (JIA), carries the highest risk of morbidity due to its association with sight-threatening uveitis. JIA is the most prevalent rheumatic disease of childhood, with uveitis presenting as the most common extra-articular manifestation. With an estimated prevalence of about 113 cases per 100,000, JIA is seen in close to 10% of these patients [1].

Treatment of JIA-associated uveitis often necessitates the use of long-term corticosteroids or immunosuppressive agents, each of which poses a significant side effect profile. Recent treatment algorithms published in the United Kingdom and Europe [1, 2] aim to ultimately achieve no activity in the anterior or posterior segments of the eye. Treatment is usually commenced on intensive topical glucocorticoids, with a step-up approach employing immunosuppressive agents for those cases with poor response or high-risk secondary features such as cystoid macular oedema (CMO). More recently, intravitreal implants containing 700 μg of dexamethasone (sustained release) [3] and intravitreal injections of triamcinolone (used off-label) [4] have been used in the treatment of JIA. However, given the chronic nature of the disease and the relatively short half-life of these forms of steroids, patients often require repeated injections—with their associated risks.

We present a case of bilateral JIA-associated uveitis with secondary macular oedema treated successfully with a 0.19 mg fluocinolone acetonide intravitreal implant (ILUVIEN®, Alimera Sciences, Hampshire, UK). To our knowledge, this is the first successful application of this therapy in this population. Description of this case provides clinicians with a potential alternative treatment approach for challenging cases of JIA-associated uveitis that are unresponsive to conventional therapy but show good response to short-term intravitreal corticosteroid therapy.

A 20-year-old woman with a background of JIA-associated uveitis initially presented to our unit with a 2-month history of blurred vision and associated floaters. The patient’s past medical history was significant for an oligoarticular form of JIA, diagnosed at age 8 whilst living in Eastern Europe. Her surgical history was significant for bilateral cataract surgery at 16 years of age. The aetiology of her cataracts was thought to be steroid-induced secondary to intensive topical treatment. Visual acuity was 6/36 + 1 (0.82 logMAR) in the right eye (OD) and 6/150 (1.39 logMAR) in the left eye (OS). Examination identified anterior chamber inflammation: (OD) cells + +, flare +, (OS) cells + +, flare + + and posterior vitritis (OD) +, (OS) +++. Given the nature of posterior uveitis and severity of disease, fundus examination was not possible; however, B-scans confirmed a flat retina and associated vitritis. Treatment was commenced consisting of topical prednisolone acetate 1% and cyclopentolate 1%. Blood tests on her initial attendance confirmed elevated P-ANCA-positive titre and anti-nuclear antibody-positive titre. Her subsequent clinic appointment confirmed the previous diagnosis of JIA, with minimal response to topical therapy. She described joint issues since childhood, with a 5-year history of poorly managed complicated eye disease. Topical therapy provided improvement in vision [OD, 6/30 − 1 (0.68 logMAR); OS, 6/30 (0.70 logMAR)], but on the completion of optical coherence tomography (OCT) scans, CMO was identified on a background of chronic uveitis and central retinal thickness (CRT) (OS) of 471 μm. Alongside topical therapy, orbital floor triamcinolone was initially trialled in the worse affected eye (i.e., OS). Despite a good initial response, she presented within 2 months with a flare-up of uveitis. There remained bilateral chronic uveitis with macular oedema in both eyes (patient care illustrated in Fig. 3). 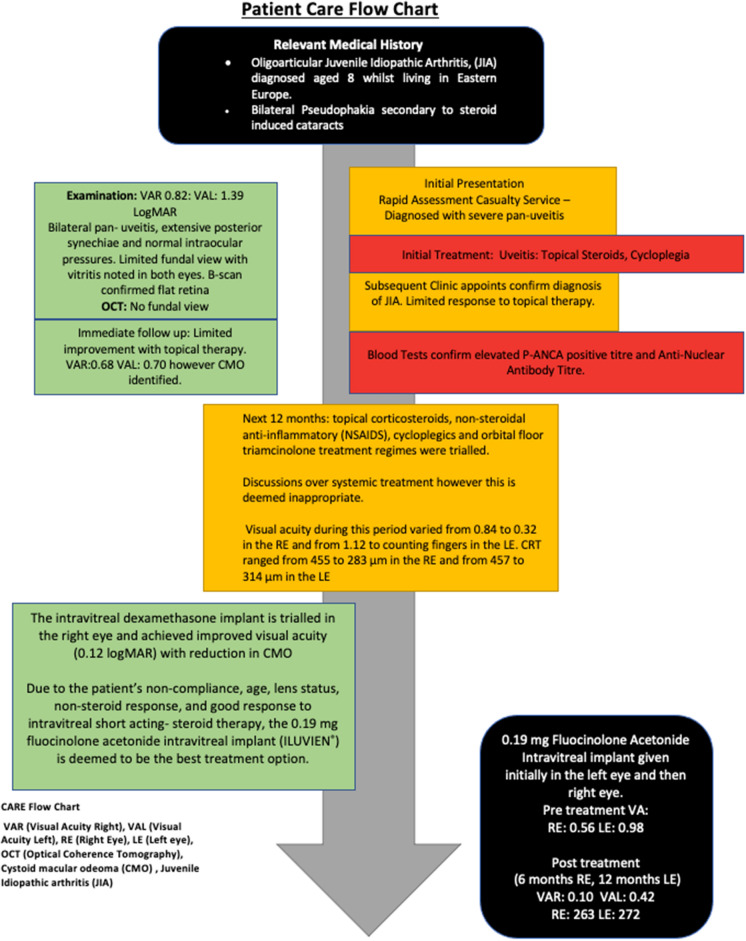 Written informed consent was obtained from the patient for the use of her medical records in writing this case report. The individual patient consent form is available on request. Formal ethics approval from the University Research Ethics Board was not required for the completion of this case report.

Over the course of the next 12 months, a variety of topical corticosteroids, non-steroidal anti-inflammatory drugs (NSAIDs), cycloplegics, and orbital floor triamcinolone treatment regimes were trialled. Discussions of systemic treatment took place; however, given a history of poor compliance and a potential risk of pregnancy, this was deemed inappropriate. Visual acuity during this period varied from 6/36 − 2 (0.84 logMAR) to 6/12 − 1 (0.32 logMAR) (OD) and from 6/95 (1.12 logMAR) to counting fingers (OS). CRT ranged from 455 to 283 μm (OD) and from 457 to 314 μm (OS). Additionally, during this window, the patient’s intraocular pressure (IOP) ranged between 12 and 21 mmHg (OD) and 9 and 19 mmHg (OS), with a vertical cup-to-disc ratio (VCDR) of between 0.3 and 0.4 in both eyes. Given the patient was bilaterally pseudophakic and did not appear to be a steroid responder, an intravitreal form of sustained-release steroid implant was indicated. The intravitreal dexamethasone was initially trialled in the right eye and achieved improved visual acuity [6/7.5–1 (0.12 logMAR)] and a reduction in macular oedema. However, given this response, the patient was lost to follow-up. Unfortunately, after a series of non-attendances, 4 months after her last intravitreal therapy she became symptomatic once more, requiring further intervention. Due to the patient’s non-compliance, age, lens status, non-steroid response, and good response to intravitreal short-acting steroid therapy, the 0.19 mg fluocinolone acetonide intravitreal implant (ILUVIEN®, Alimera Sciences, Hampshire, UK) was deemed to be a suitable treatment option.

In September 2018, the left eye was injected with a fluocinolone acetonide implant; the visual acuity was 6/60 + 1 (0.98 LogMAR) prior to treatment (Fig. 1). Follow-up confirmed complete resolution of CMO and quiet posterior segments in the ensuing 12 months. At this point the CRT in this left eye was 272 μm, with a concurrent improvement in visual acuity (Fig. 2), and the right eye was implanted 10 months after the left eye had been initially treated. Intraocular pressures post administration of the fluocinolone acetonide implant remained within below 21 mmHg at all follow-up appointments. Visual acuity and CRT outcomes following implant can be seen in Table ​Table11.

Right and left eye prior to treatment. Exhibiting significant vitreous haze, unable to determine severity of cystoid macular oedema in left eye due to severity of vitritis

*unable to quantify due to severity of vitritis