It is known that the retinal detachments (RDs) associated with a morning glory disc anomaly (MGDA) usually appear from around the disc anomaly and complications by peripheral fibrovascular proliferation and tractional RD are very rare. We report our findings in an eye with MGDA that had a tractional RD, massive exudation from a peripheral temporal fibrovascular proliferation and vasculatures stretched by this proliferation and by a contraction of the hyaloidal membrane. The RD was successfully treated by vitrectomy and encircling buckling surgery.

Morning glory disc anomaly (MGDA) was first described by Kindler in 1970.1 MGDA is a congenital malformation of the optic nerve head, and the optic nerve head is covered by a fibroglial white tissue membrane with an annular retinal pigmented epithelial hypoplasia.1, 2, 3, 4, 5 It is known that the retinal detachments (RDs) associated with a MGDA usually appear from around a disc anomaly.2,4,5 The causes of the RDs have been suggested to be exudation from abnormal vessels or the optic nerve sheath, traction by the vitreous, or small retinal tears around the optic disc.2,4,5 Two studies have reported peripheral exudative or tractional RD in eyes with MGDA,6,7 and She et al. reported that tractional RD was present in one of 16 cases.6 However, the mechanism causing the peripheral RD has not been reported, and the best treatment for the RD has not been determined.

We report our findings in a rare case of MGDA with extensive exudative and tractional RDs caused by a peripheral fibrovascular proliferation that was successfully treated by vitrectomy with scleral buckling.

A 7-year-old Japanese girl with MGDA was first examined when she was 2-years-old at another hospital because of strabismus. She was diagnosed with MGDA in her left eye at that time. She was treated with corrective spectacles for her hyperopia, and her right eye was patched intermittently. The decimal best-corrected visual acuity (BCVA) was 0.1 (+2.75 D = −3.5 DC ax180°) in the left eye, and she was followed by yearly examinations (Fig. 1A). When she was 6-year-old, a preretinal membrane was detected in the posterior pole of the left eye, and the arcade vessels appeared taut (Fig. 1B). When she was 7-years-old, her decimal BCVA decreased to 0.05 in her left eye and a RD with exudation developed. The exudation extended from the posterior pole to the peripheral temporal area in her left eye (Fig. 1C). The doctors in the hospital tested for anti-Toxoplasma gondii antibody, and the results were negative. She was referred to our hospital for further examinations and possible treatment because the RD had progressed.

Fundus photograph of the left eye taken at the initial hospital.

A: Fundus photograph taken when the patient was 3-years-old. Morning glory disc anomaly (MGDA) can be seen.

B: Fundus photograph taken when the patient was 6-years-old. A preretinal membrane can be seen in the posterior pole, and it appears to be contracted.

C: Fundus photograph taken when the patient was 7-years-old before she came to our clinic. Exudation, preretinal membrane, and retinal detachment (RD) are present.

Our initial examination showed that her medical and family histories were unremarkable, and she was a full-term baby. The results showed that her pupillary reflexes were prompt in the right eye and sluggish in the left eye. A relative afferent pupillary defect (RAPD) was present in the left eye. The BCVA was 1.2 (+2.75 D = −0.5 DC ax147°) in the right eye and 0.04 (+2.0 D = −3.0 DC ax180°) in the left eye. The intraocular pressure was 16 mmHg in the right eye and 10 mmHg in the left eye. The anterior segment was normal bilaterally, and the lens was clear bilaterally. The fundus was normal in her right eye, but the fundus of her left eye showed MGDA with a RD with massive yellowish exudation without a retinal break. A peripheral fibrovascular proliferation which extended to the vitreous was detected in the peripheral temporal retina of her left eye. The retinal vessels from the disc to the temporal periphery appeared stretched by this proliferation and by a contraction of the hyaloidal membrane. A preretinal fibrous membrane covered the optic disc which extended to the temporal retina (Fig. 2A). Early phase fluorescein angiography (FA) of her left eye showed taut vessels and abnormal branching of the peripheral vessels with leakage. There was also temporal peripheral telangiectasia of the fibrovascular proliferation with massive leakage. Non-perfused retina was also observed around the abnormal vessels in the peripheral retina (Fig. 2B–D). The FA findings were unremarkable in the right eye. Optical coherence tomography (OCT) showed a thick preretinal membrane and retinoschisis with an abnormal retinal layer. Each layer was absent, and the separation of the layers was not present in the macular area. A RD of the inferior area of the macula was present (Fig. 2E and F). There was a strong traction by the fibrous membrane from the temporal proliferation and preretinal membrane and exudation from the peripheral vascular proliferation. We diagnosed the patient with MGDA associated with tractional and exudative RD with peripheral fibrovascular proliferation. 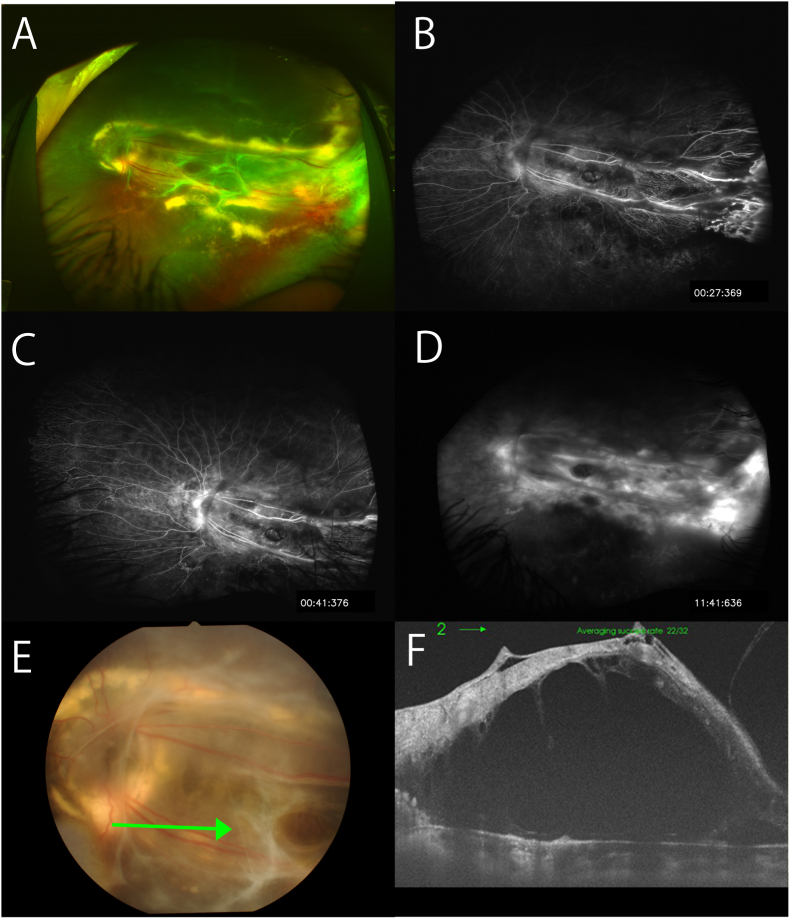 Fundus findings of the left eye at the first examination in our hospital.

A: Widefield pseudo-color fundus photograph taken by Optos®. MGDA with preretinal fibrous membrane, and straight retinal vessels can be seen in the posterior pole as was observed at the original hospital. The RD is over the superior, temporal, and inferior retina. Massive exudation and inferotemporal peripheral fibrovascular proliferation can also be seen.

D: Late phase FA of Optos® image. Massive leakage can be seen from the abnormal vessels in the fibrovascular proliferation.

F: Optical coherence tomography (OCT) image of the inferior area of the macula. The image shows retinoschisis and RD with a preretinal membrane. (For interpretation of the references to color in this figure legend, the reader is referred to the Web version of this article.)

We performed lens sparing vitrectomy with encircling buckling. During the vitrectomy, we incised the vitreous, removed the preretinal membrane gently using a pic, forceps, spatula, and vitreous cutter with injection of hyaluronic material between retina and preretinal membrane. The hyaloid membrane was contracted and adhered tightly to the retina. Although it was difficult to create a posterior vitreous detachment, we were able to do this to the equatorial area. A lamellar retinal break was detected in the macular area but a full thickness retinal break was not detected. In the peripheral area, we shaved off as much of the fibrous tissue as possible, and we performed cryopexy on the temporal fibrovascular proliferation. Most of the peripheral retina was avascular. Then, the subretinal fluid was drained through a retinotomy at the mid-supratemporal peripheral retina. Fluid-air exchange was performed followed by laser photocoagulation of the avascular retina, gas tamponade with 20% sulfur hexafluoride (SF6) gas, and encircling buckle with a #506 sponge.

After the surgery, the fibrovascular proliferative membrane became a fibrotic with regression of the abnormal vessels in it, and the exudation regressed. The retina gradually completely reattached. (Fig. 3A–D). We have followed this patient for 12 months, and the RD has not recurred, and her crystallin lens has also not become cataractous. Her BCVA was maintained at 0.03, and she reported an improvement of her visual field. 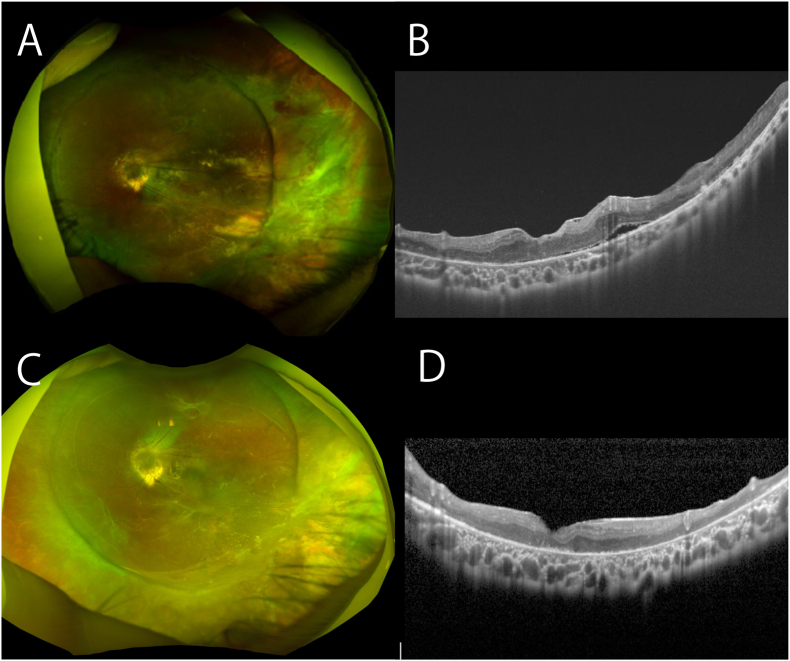 A: Pseudocolor fundus photograph of Optos® image one month after the surgery. The fibrovascular proliferation has become fibrotic with regression of the abnormal vessels. The exudation has regressed, and the RD is not detected. Fibrosis is present around the intentionally created retinal hole.

B: OCT image of the macular area one month after the surgery. A small RD remains but the shape of the macula has resolved but the ellipsoid zone is abnormal.

C: Pseudocolor fundus photograph taken with Optos® camera 12 months after the surgery. The fibrosis around the intentional retinal with retinal folds is observed but the RD has not recurred.

In our patient, a peripheral avascular retinal area was detected in the FA images and during surgery. The findings in our case and previous reports suggest that fibrovascular proliferation with abnormal new vessels most likely caused the tractional RD with massive exudation.

We successfully treated the eye with lens sparing vitrectomy and encircling buckling surgery. There has been only one report on the treatment of peripheral exudative RDs in eyes with MGDA, and the authors of that study used only laser photocoagulation and steroids.7 On the other hand, we required surgery because the traction was severe. We believe that the exudative RD can be treated by laser photocoagulation or cryopexy alone but the tractional RD with exudation may require vitrectomy because of the extensive posterior involvement. Moreover, we believe that scleral buckling with vitrectomy can be an effective treatment for peripheral tractional RD because the buckle can serve to support the residual contraction of the posterior hyaloid membrane and fibrosis. In addition, the buckle prevented a subsequent contraction. But the surgical indications and optimal methods have not been definitively determined and further studies are needed.

This patient had been followed with fundus examinations since she was 2-year-old with 55-degree fundus photographs. At that time, the peripheral retinal changes might have already developed, and it is important to know the possibility of peripheral changes in eyes with MGDA. This will allow us to follow the eyes and take good care of not only the posterior pole but also the peripheral retina. Recent advances of the widefield fundus cameras can be useful for following children with MGDA.

In conclusion, we report a rare case of MGDA with extensive exudative and tractional RD caused by peripheral proliferative retinopathy. The findings suggest that careful fundus observations of not only the posterior pole but also the peripheral retina is important for following patients with MGDA.

Written consent to publish about details of the case and photographs was obtained from the patient and her parent.

No funding nor grant support.

All authors declare that they meet the current ICMJE criteria for Authorship.

The authors thank Professor Emeritus Duco Hamasaki of the Bascom Palmer Eye Institute of the University of Miami, Florida for his critical discussion and final manuscript revision.