Arthritis is one of the most common comorbidities in heart failure (HF) patients, and is associated with decreased activity levels. Few studies have examined sedentary behavior (SB) in HF patients with arthritis, and little is known about the factors that may influence SB in this population.

This is a retrospective, secondary analysis using data collected from a randomized control trial. SB was measured by the daily sedentary time collected by accelerometers. Structural equation modeling was performed to examine relationships between key concepts based on social cognitive theory, and elucidate the potential pathways by which demographic, clinical and sociobehavioral factors that influence SB.

A total of 101 participants’ data were used for this analysis. Participants were mainly female (n = 64, 63%) with a mean age of 70 years (standard deviation (SD) = 12.2) and an average of 13 years of education (SD = 2.3). SB was highly prevalent at baseline (mean value: 21.0 h/day), 3 months (mean value: 20.6 h/day) and 6 months (mean value: 20.8 h/day) in study participants. Factors with statistically significant positive association with sedentary time include age and retirement, while significant negative association was found with current employment. HF self-care efficacy and behavior were also significantly associated with SB.

Most HF patients with arthritis in this study lived a sedentary lifestyle. Additional studies are needed to identify feasible and effective exercise programs for HF participants with arthritis.

Sedentary behavior (SB) is defined as any waking behavior characterized by energy expenditure ≤ 1.5 metabolic equivalents (METs) while in a sitting or reclining posture [1]. SB has become the major risk factor for cardiovascular diseases, associated with significant disability and mortality in patients with heart failure (HF) [2]. It has been reported that SB in patients with HF is associated with nearly twice the risk of cardiac death and all-cause mortality [3-5]. In addition, one of the most common comorbid conditions among patients with HF is arthritis, which appears to be a major contributor to physical inactivity and SB [6]. The burden of HF is even greater among rheumatoid arthritis patients [7-9], who experience a two-fold higher HF incidence rate in comparison with general population [7]. HF patients with arthritis are 60% more likely to live a sedentary life [5, 10, 11]. Furthermore, mortality following HF is significantly higher in patients with rheumatoid arthritis [12]. Therefore, increased SB may be a modifiable independent risk factor of health outcomes in HF patients with arthritis. SB is often measured by self-report questionnaires, which is a less valid and reliable method when compared to objective measures [13]. Inaccurate measurements of SB make it difficult to evaluate the intervention effects and monitor changes in SB over time. In contrast, objective measures, such as accelerometers, are believed to offer more accuracy without recall and response bias which exist in self-reported measures [14]. The accelerometer is the most widely used and accepted objective measure of daily physical activity (PA) and calorie expenditure in research and clinical settings [15].

Accelerometry uses triaxial measurements of movement in three orthogonal directions to report estimates of both intensity and duration of bodily movements [13], and has been used to gather detailed information about SB in various patient/healthy populations [16]. However, the use of accelerometery to assess SB in HF has been rarely reported. Furthermore, the factors influencing SB and subsequent PA levels in HF have yet to be fully elucidated [17]. In general, social cognitive theory (SCT) has been one of the predominant theoretical frameworks to guide the study in PA [18-20], however little is known about the process through which SCT variables influence SB in HF patients with arthritis [21]. To develop and implement more effective interventions to reduce SB in HF patients with arthritis, a better understanding of the factors underlying SB is needed. Therefore, the purpose of this study was to test an SCT model of PA, created by hypothesizing direct and indirect effects of demographic, clinical, and sociobehavioral factors on SB among HF patients with arthritis.

This study was a secondary analysis using the data from a randomized controlled trial aimed at examining the effectiveness of a 12-week home-based intervention to improve HF self-management adherence [22]. The original/parent study was approved by the University Institutional Review Board and the rural hospital ethics committee. All participants of the parent study gave written informed consent [22]. Taking a different focus from the original study, the purpose of this secondary analysis was to describe SB measured by accelerometers and examine the factors influencing SB in HF patients with arthritis.

Participants were recruited from the hospital, and eligible participants: 1) were aged 21 years or older; 2) had HF as one of their discharge diagnoses; 3) were classified as New York Heart Association (NYHA) class II or above, and had at least one HF-related hospitalization or emergency department visit in the previous year; 4) with an established diagnosis of arthritis; 5) were discharged to home; 6) passed a mini-cog screen test [23]; 7) understood English; and 8) had access to a phone. We excluded participants who: 1) had depressive symptoms, and received a score of 3 or above on the Participant Health Questionnaire-2 (PHQ-2) [24]; 2) were diagnosed with liver cirrhosis; 3) were diagnosed with chronic renal failure; or 4) were diagnosed with other end-stage and/or terminal illness (e.g., cancer), which limited the participant’s ability to perform moderate or above PA. The study setting has been described in more detail in a previously published manuscript [22].

Data are expressed as mean ± standard deviation (SD) or number of cases (percentage). Unpaired Student’s t-tests and χ2 test were used for comparisons of continuous and categorical variables, respectively. Mann-Whitney U-test was utilized to compare data that were not normally distributed. Pearson and Spearman correlation coefficients were used to identify the relationship between variables associated with SB. Partial correlation was also performed by adjusting each bivariate correlation for confounders. Then, multivariate regression analysis, with stepwise backward selection of variables, was used to determine the independent correlates of SB. The Akaike’s information criterion was used to determine the most appropriate predictive model [35]. For all crossover end points, the analysis was performed on an intention-to-treat basis. A P value < 0.05 was considered statistically significant. All statistical analyses were performed using IBM SPSS for windows software (SPSS Inc., Chicago, IL, USA). 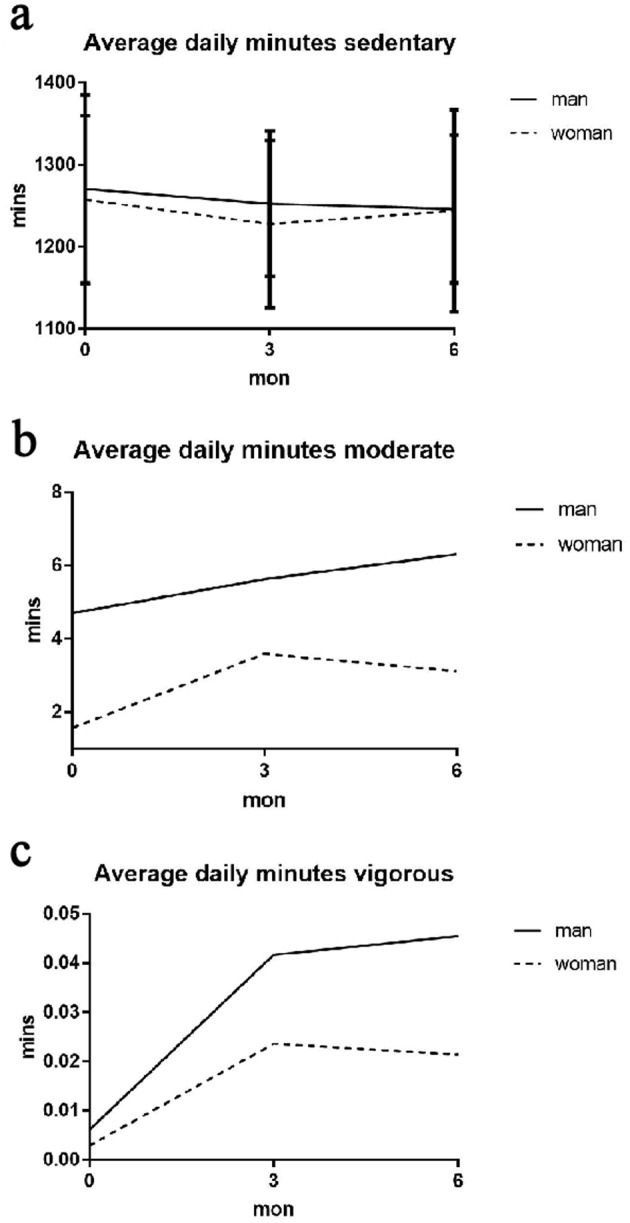 At baseline, HF patients with arthritis spent an average of 89% of the day in SB, 9.5% in light intensity PA level, 1.5% in lifestyle activity level, and less than 0.2% in moderate and vigorous PA level of PA.

The bivariate correlation showed negative relationships between SED-time and being employed, levels of blood hemoglobin (HGB), hematocrit (HCT), and dietary sodium intake that was assessed by 24 h urinary sodium excretion (Table 3). In multiple regression models, SED-time was negatively associated with self-care knowledge, HGB, and systolic blood pressure at hospital admission, while positively associated with log transformed BNP, white blood cell and discharge weight (Table 4). NYHA HF classification was also included in the bivariate analysis and was therefore controlled for and found not to be significantly associated with SED time (P = 0.25).

The SEM was used to develop and test the proposed model underpinned by the social cognitive theory (Fig. 4). The model-fit statistics was acceptable (CFI = 0.947, AGFI = 0.908, RMSEA = 0.001). The personal factors entered in the final model included age, employment status, and HGB. Employment status was significantly related to SED-time (standardized coefficient (r) was 0.36, P < 0.001). Age was positively related with HF self-care behavior measured by RSCB (r = 0.26, P < 0.01). There was a nearly significant negative correlation between HGB and SED-time (r = 0.18, P = 0.06). 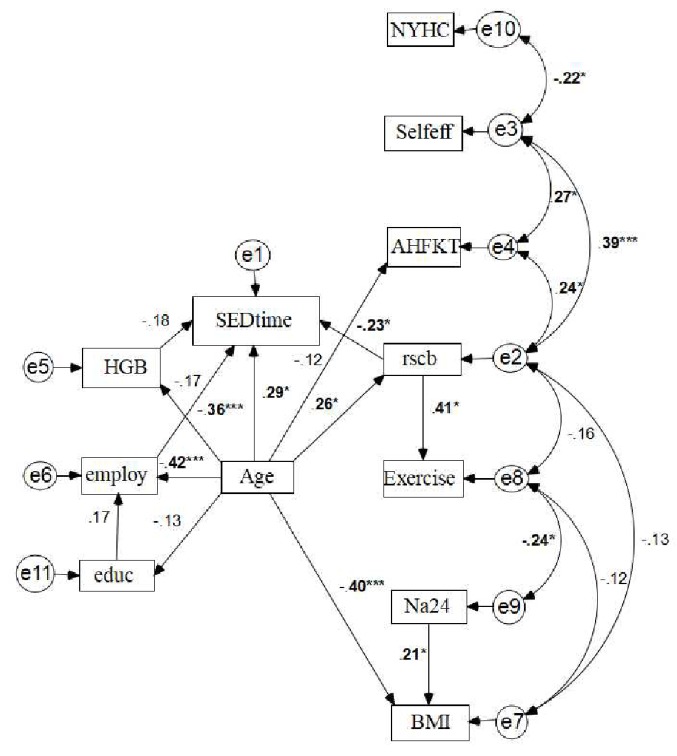