Thyroid eye disease (TED) is an autoimmune disease that causes retro-orbital inflammation and subsequent proptosis, corneal exposure, strabismus, and variable vision changes. European studies have shown that TED can severely impact quality of life (QOL), but little is known about the QOL of patients with TED in the USA. Given that patient QOL influences TED severity classifications and subsequent treatment, understanding physician-perceived patient QOL is extremely important.

This retrospective chart review (conducted in 2018) examined QOL in US patients with moderate-to-severe TED, as reported by treating physicians who regularly manage patients with TED (≥ 5 patients in prior 12 months). The physicians graded patients’ overall QOL (7-point Likert scale; 1 = “not at all impaired”, 7 = “extremely impaired”), assessing mental health, vision changes, and ocular structural signs/symptoms. Patient demographics and clinical findings were examined to understand the impact of disease presentation on physician-perceived QOL.

Medical record data of 714 US patients with moderate-to-severe TED were provided by 181 physicians (73 endocrinologists, 108 ophthalmologists). Patients had a mean age of 49.4 (standard deviation [SD] 13.6) years, and 102 cases (14%) were severe. Anxiety and/or depression was reported in 36% of patients (an increase from the 18.9% prevalence reported for the USA in 2017 by the US National Institute of Mental Health; P < 0.001). The mean physician-reported QOL impact score was 4.1 (SD 1.5). Furthermore, 62 and 89% of patients with moderate and severe TED, respectively, had a high physician-perceived QOL impact (≥ 4). The higher QOL impact group had significantly higher rates of pain symptoms, visual disturbances (including diplopia), and orbito-facial structural changes. Higher disease activity and severity were associated with lower physician-perceived QOL.

Patients’ QOL, as evaluated by US physicians, is highly impacted by the activity and severity of TED. Additionally, mental health issues were more frequently reported by patients with TED than in the general US population. Ocular pain, strabismus, and diplopia appear to be main drivers of physician-perceived QOL impairment in this sample of US patients with TED.

Little is known on how thyroid eye disease (TED) affects patient quality of life (QOL) in the USA. Patient QOL can affect how TED is treated; consequently, it is important to understand how physicians perceive QOL in patients with TED. We evaluated 714 patients, as reported by physicians, with this rare condition to better understand QOL in US patients with TED. The medical records of 612 patients with moderate TED and 102 patients with severe TED were examined. QOL impact was rated from 1 to 7, with 1 being “not at all impaired” and 7 being “extremely impaired.” Overall QOL, as assessed by treating physicians, is heavily impacted by both moderate and severe TED in US patients, with these patients also reported to have a higher frequency of mental health diagnoses than reported in the general US adult population. Higher levels of inflammation on and around the eye and more severe disease led to a higher QOL impairment. More specifically, pain, visual disturbances (including double vision), and changes to the face and tissues around the eye all negatively affected QOL.

Thyroid eye disease (TED) is an autoimmune condition that begins with progressive inflammation, frequently referred to as ‘active’ or ‘acute’ TED. Inflammation and/or expansion of orbital and retro-orbital tissues can lead to subsequent ocular pain, proptosis, diplopia, exposure keratopathy, and optic neuropathy [1, 2]. After approximately 1–3 years, TED becomes chronic and less active with varying levels of long-term sequelae, such as proptosis and diplopia [3, 4]. Only about 2% of patients with moderate-to-severe TED are ever considered to be free of TED [5], which will hopefully change with newer, more targeted therapies. Therefore, many patients experience significant changes in their quality of life (QOL) due to changes in their appearance, visual alterations, inability to cope, and mental/psychiatric manifestations [6–8]. Studies have shown that patients with TED have an equivalent or poorer QOL than patients with diabetes, emphysema, or heart failure [9].

The effect of TED on patient QOL has been widely studied in Europe. However, only a few studies have evaluated the impact of TED on patients’ QOL in the USA. Similar to results of European studies [10, 11], Bradley et al. [12] found impaired QOL in patients with TED, with diplopia being an influencing factor. Schotthoefer and Wallace [13] demonstrated QOL improvement following surgical correction of TED-related strabismus. Lastly, Paulsen et al. [14] found that dry eye disease, which is highly present in patients with TED, significantly lowers QOL.

To the best of our knowledge, no prior studies have examined how physicians in the USA perceive QOL in their patients with TED. QOL assessment can influence treatment decisions and patient–physician relationships, both of which are of particular importance for patients with TED because physician-perceived QOL helps define disease severity and provides justification for utilizing certain immunosuppressive, surgical, and/or biological therapies [15]. In the study reported here, we examined the impact of physician-reported QOL on patients with moderate-to-severe TED. Patient clinical data were also examined to better understand the drivers of QOL impact.

This study was given exempt status by the Western Institutional Review Board (Puyallup, WA, USA; registration no.: IRB00000533), waiving the requirement of informed consent. All study conduct adhered to the tenets of the Declaration of Helsinki of 1964, and its later amendments. Ophthalmologists and endocrinologists who completed the survey were reimbursed for their time.

Ophthalmologists and endocrinologists who regularly manage patients with TED (at least 5 patients within the prior 12 months) completed an online survey between 1 September and 31 December 2018 regarding their TED patient population and treatment practices. Physicians were then asked to complete data collection forms (only de-identified data collected) using clinical records of up to four patients with moderate-to-severe TED. The survey forms also included questions on physicians’ perceptions on how TED impacted patient QOL, such as “To what degree does TED impair this patient?”, in terms of overall QOL and subscale measures (ability to attend work/school, ability to function in social situations, ability to participate and enjoy day-to-day activities, ability to drive and psychological well-being). Responses were scored using a Likert scale, ranging from 1 (“not at all impaired”) to 7 (“extremely impaired”). The survey was programmed in and administered via an established platform (Confirmit; Oslo, Sweden), and physicians were recruited from existing market research panels (via an independent third party [Biovid; Bristol, PA, USA]). A link to the screening questionnaire was sent via email to physicians. Those wishing to participate simply opted in by clinking on the link.

The median overall QOL impact was calculated and used as the cut-off point to divide patients into higher and lower QOL impact groups. Patient characteristics, pain, visual symptoms, and orbito-facial structural changes (e.g., proptosis, soft tissue changes, extraocular muscle involvement) were then compared between groups in an effort to understand how each of these factors potentially influenced QOL.

TED severity was reported by physicians as moderate or severe. TED activity for each patient was determined by calculating the clinical activity score (CAS), with 1 point given for each of the following signs/symptoms: pain in the primary gaze, pain with eye movement, eyelid swelling, eyelid redness, conjunctival swelling, conjunctival redness, and caruncle swelling [16]. In this survey, six of seven measures were used to calculate CAS because information on caruncle status was not available.

aComparisons of patients with moderate and severe TED were performed using a 2-tailed Student’s t test or chi-square test, as appropriate

bOverall and subscale QOL were scored by physicians using a Likert scale, ranging from 1 (not at all impaired) to 7 (extremely impaired)

Comparison of Patients with Moderate and Severe TED

Effect of TED Signs and Symptoms on QOL Impact

bTED severity was reported by physicians as moderate or severe. TED activity for each patient was determined by calculating the clinical activity score (CAS), with 1 point given for each of the following signs/symptoms: pain in the primary gaze, pain with eye movement, eyelid swelling, eyelid redness, conjunctival swelling, conjunctival redness, and caruncle swelling. In this survey, data for caruncle swelling were not available and thus the CAS ranged from 1 to 6

cIndicates reporting of anxiety and/or depression 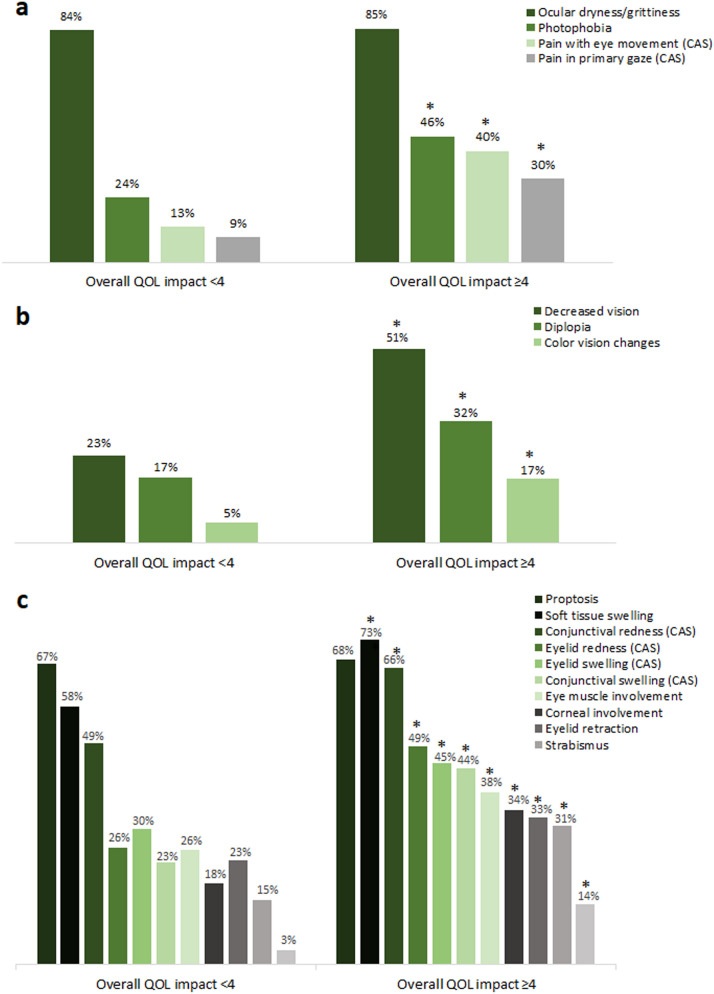 Prevalence of pain symptoms (a), vision-related symptoms (b), and structural signs (c) associated with thyroid eye disease in patients with a higher and lower quality of life (QOL) impact score. Asterisks indicate a statistically significant difference between groups as calculated using a 2-tailed chi-square test (a, b: all P < 0.001; c: all P ≤ 0.009). CAS Clinical activity score measure (see section “Methods” for details) 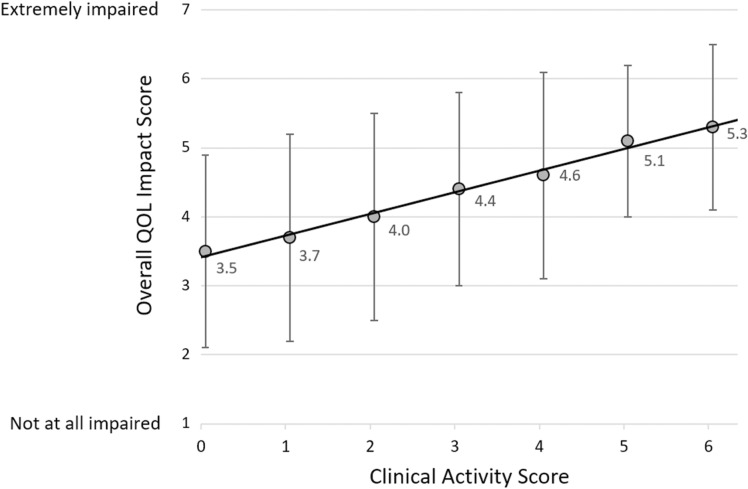 Severe disease was reported more often in patients with a higher QOL impact score (Table ​(Table2).2). Furthermore, the proportion of patients with severe TED progressively increased from 0 to 54% as the overall QOL score increased from 1 (not at all impaired) to 7 (extremely impaired; Fig. 3). Although physicians made the determinations on TED severity, clinical parameters described by the American Thyroid Association (ATA) [16] and European Group on Graves’ Orbitopathy (EUGOGO) [15] that contribute to TED severity classifications were examined. Factors that progressively increased with overall QOL impact score included eye muscle involvement (24–75%), corneal involvement (18–61%), and the presence of compressive optic neuropathy (0–25%). 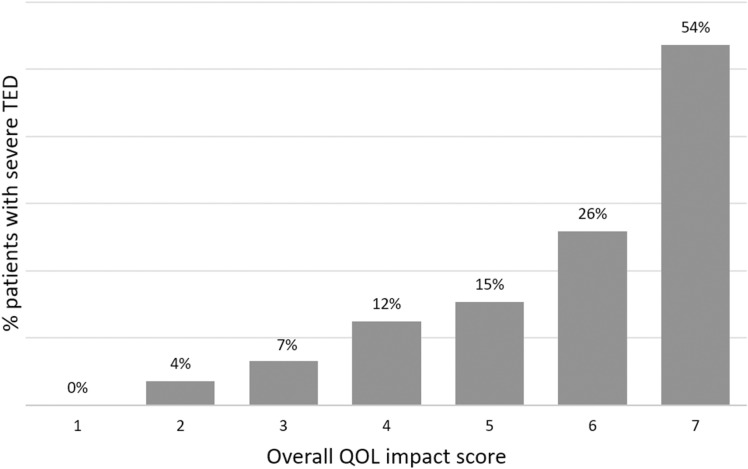