In Japan, the number of patients with atrial fibrillation continues to grow with the aging of the population. Prevention of cardiogenic cerebral embolism is extremely important in patients with atrial fibrillation. While warfarin has long played a major role for this purpose, a new oral anticoagulant, dabigatran etexilate (dabigatran), has demonstrated superior efficacy and safety in recent years. We conducted a multicenter prospective interventional study to examine whether dabigatran could demonstrate superiority over warfarin in practical clinical situation.

Among outpatients attending Fukuoka University Chikushi Hospital or clinics registered with the Chikushi Cardiovascular Disease Clinical Research Network (Chikushi-JRN), 143 patients with nonvalvular atrial fibrillation (NVAF) were enrolled in this study and followed up for 12 months after initiation of dabigatran therapy. The primary endpoint was occurrence of cerebral embolism or systemic embolism, while secondary endpoints were: 1) Bleeding events; 2) Changes in the activated partial thromboplastin time (aPTT); 3) Adverse events; and 4) Changes in blood pressure and pulse rate.

During the follow-up period, none of the patients developed cerebral or systemic embolism (the primary endpoint). In addition, there were no bleeding events or other adverse events (the secondary endpoints). aPTT remained stable throughout the 12-month observation period. A significant decrease in systolic blood pressure was observed at 1 month after initiation of dabigatran therapy, and blood pressure was reduced up to 12 months. Blood pressure showed a significant decrease in patients with paroxysmal atrial fibrillation, but not in patients with chronic atrial fibrillation.

Dabigatran showed a stable anticoagulant effect, and its safety was confirmed. Dabigatran also reduced blood pressure, which may help to explain why it causes fewer major bleeding events than warfarin.

The prevalence of atrial fibrillation increases with age. Accordingly, the number of patients with atrial fibrillation continues to grow in Japan with aging of the population, and is expected to exceed one million by 2020. Although atrial fibrillation is not a lethal arrhythmia, it is the primary risk factor for cardiogenic cerebral embolism and thus requires adequate management. The results of a phase 3 international collaborative study of dabigatran (Randomised Evaluation of Long-Term Anticoagulation Therapy (RE-LY study)), a pioneering novel oral anticoagulant, were reported at the 2009 European Society of Cardiology Congress, demonstrating superior efficacy and safety of dabigatran over warfarin when used to prevent cardiogenic cerebral embolism in patients with nonvalvular atrial fibrillation (NVAF). In the present study, we evaluated the preventive effect of dabigatran on cardiogenic cerebral embolism and the risk of bleeding in patients with NVAF in practical clinical situation. Based on the results of the RE-LY trial that dabigatran is safer than warfarin, we examined clinical factors that may contribute to the reduction in bleeding rate, and it has become clear that blood pressure reduction may have been linked to dabigatran’s safety. We investigated the possibility that dabigatran improves various factors related to bleeding safety.

The subjects were NVAF patients aged < 85 years who were initiating or continuing outpatient anticoagulant therapy at Fukuoka University Chikushi Hospital or at clinics registered with the Chikushi Cardiovascular Clinical Research Network (Chikushi-JRN). The study protocol was approved by the ethics committee of Fukuoka University Chikushi Hospital (R12-022), and all subjects gave written informed consent to participation.

This was a multicenter prospective interventional study. Patients were registered from September 2012 through October 2014 and were followed up for 12 months from the time of giving consent. In patients switching from warfarin to dabigatran, administration of dabigatran was initiated immediately if the prothrombin time-international normalized ratio (PT-INR) was < 2.0. If the PT-INR was ≥ 2.0, dabigatran was initiated after confirming a decrease below 2.0 following discontinuation of warfarin. NVAF patients who were newly starting anticoagulant therapy were immediately commenced on dabigatran. The standard dose of dabigatran was 300 mg/day, which was reduced to 220 mg/day for patients aged ≥ 70 years or those with moderate renal dysfunction (creatinine clearance: 30 – 50 mL/min). Measurement of blood pressure and pulse rate, as well as blood biochemistry tests, were carried out at 0, 1, 3, 6, 9, and 12 months after initiation of treatment. The blood pressure measurement method adopted the average value measured three times in sitting position in the outpatient clinic of each facility.

The primary endpoint was the occurrence of cerebral embolism or systemic embolism. Secondary endpoints were: 1) Bleeding events; 2) Changes in the activated partial thromboplastin time (aPTT); 3) Adverse events; and 4) Changes in blood pressure and pulse rate.

Statistical analysis was performed by using SAS 9.3 (SAS Institute Inc., Cary, NC, USA). Results are reported as the mean ± standard deviation (SD). Categorical variables were compared between groups by Chi-square analysis or Fisher’s exact test. The differences in continuous variables between groups were examined by Student’s t-test or Wilcoxon’s rank-sum test. Differences were considered to be statistically significant when the P values were < 0.05.

Table 1 summarizes the characteristics of the 143 patients enrolled in the study. Their mean age was 73 years, 69% were male, and the mean body mass index (BMI) was 24.0 kg/m2. The prevalence of hypertension (HTN), type 2 diabetes mellitus (DM), and ischemic heart disease (IHD) was 83%, 23%, and 8%, respectively. Warfarin was being used by 41% of the patients at the time of enrollment and their mean PT-INR was 1.47.

Background Factors of the Patients
Open in a separate window

None of the patients developed cerebral embolism or systemic embolism (the primary endpoint) during the follow-up period.

Blood pressure and aPTT in all patients

Figure 1a shows the changes in aPTT in 90 patients who underwent measurement. Compared with before initiation of dabigatran therapy, significant prolongation of aPTT was observed stably throughout the 12-month treatment period (P < 0.001). None of the patients developed abnormal prolongation of aPTT.

Blood pressure in the switching group and new treatment group

We compared the changes in blood pressure and heart rate (HR) after dividing the patients into a group switching to dabigatran from warfarin (switching group) and a group newly starting anticoagulant therapy with dabigatran (new treatment group) (Fig. 1b (B)). In the switching group (n = 58), a significant decrease in SBP was observed at 1 month after switching (P < 0.05). Although SBP subsequently remained below the baseline level, the decrease was not significant from 3 months onward. There was no significant decrease in DBP or HR at any time. 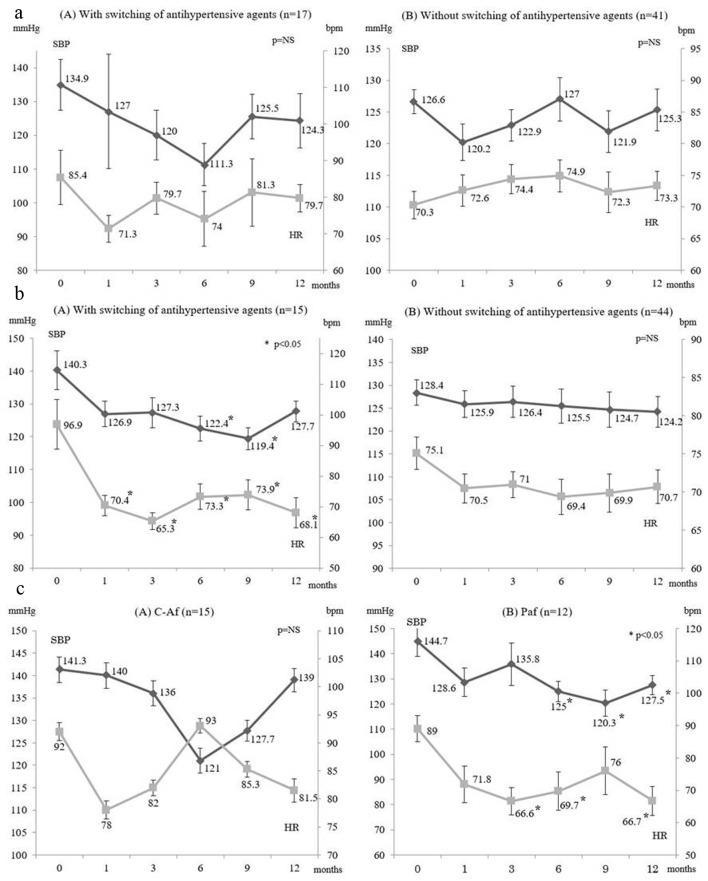 No bleeding events or other adverse events were noted in any of the subjects.