Acne vulgaris is a chronic and self-limiting disorder of the pilosebaceous unit which is primarily seen in adolescents. Acne vulgaris presents as polymorphic lesions, consisting of comedones, papules, pustules, cysts, nodules, scarring, and dyspigmentation. Acneiform presentation of cutaneous lupus erythematosus (CLE) is extremely rare. The presentation of CLE is notoriously diverse and often mimics a broad range of unrelated skin disorders. We present a case by referring to American College of Rheumatology (ACR) criteria for systemic lupus erythematosus (SLE); our patient’s conditions did not meet any of the clinical criteria of the Systemic Lupus International Collaborating Clinics (SLICC) for SLE. Subsequent to thorough history-taking, physical examination, and laboratory evaluations, the diagnosis of acne vulgaris was established, and a diagnosis of CLE was excluded. As acneiform presentation of CLE is rare, we here present a case which resembled both acne vulgaris and CLE. We describe our experience in establishing the diagnosis of severe acne vulgaris accompanied by scars in a 12-year-old boy with a malar rash and scars on his frontal and malar area who had initially been misdiagnosed as having CLE. This unusual case highlights the broad spectrum of adolescent acne and the importance of clinical identification of the disease so that unnecessary workups might be avoided.

Acne is an exceedingly common disorder of the pilosebaceous unit, and it usually affects adolescents and young adults [1]. Surprisingly, there are still limited data regarding the natural history of acne, despite its substantial prevalence and its impact in causing scars and psychological issues [2]. Some patients develop scars as the inflammatory lesions resolve. In general, scarring is more likely to occur in patients with large papules or nodules [3]. Cutaneous manifestations may be acute, subacute, or chronic. The most common manifestation of chronic cutaneous lupus erythematosus (CLE) is discoid lupus erythematosus (DLE), which manifests as indurated erythematous plaques and papules which may lead to significant scarring and alopecia [4]. We present a case of severe acne vulgaris mimicking DLE in a 12-year-old boy.

A 12-year-old boy was referred from the Department of Child Health with a 6-month history of reddish plaque on his face. Six months prior to admission, the patient had noticed some acne rising on his forehead and both of his cheeks. After a period of time, the condition had worsened as the acne had also started to appear on his nose, chin, and both of his temples. As the acne became filled with pus, the patient voluntarily popped the lesions, leading to development of scars. Prior to admission, the patient had already used over-the-counter skin care and consumed medications from family physicians. None provided any satisfactory lesion improvement.

No history of photosensitivity, oral ulcers, joint pain, or lesion exacerbation following sun exposure was found. The patient scarcely consumed spicy foods, although he consumed dairy products such as milk, yoghurt, and cheese on a daily basis. No history of long-term medication use and no family history of similar conditions were found. Physical examination of his forehead, glabella, and temples showed multiple erythematous plaques, along with scars, opened and closed comedones, papules, and pustules. The lesion on the malar sparing of his nasolabial fold areas, seen in a slight sight, was similar to that of a malar rash in systemic lupus erythematosus (SLE) (Fig. ​(Fig.1).1). On dermoscopy, we did not find any telangiectasia, hyperpigmentation, and poikilodermatous appearance (Fig. ​(Fig.2)2) [5]. 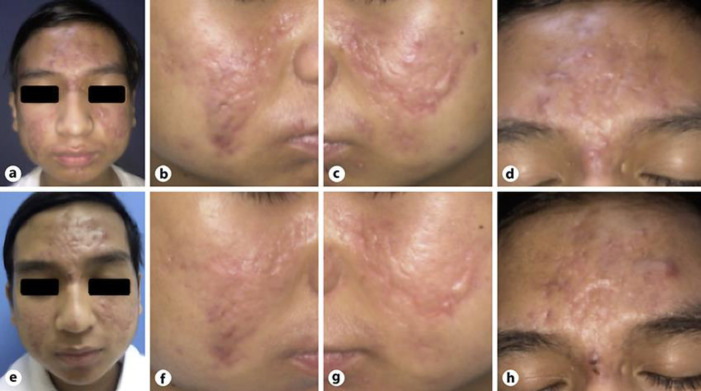 On the first visit (a–d), there were malar rash-like erythematous plaques with sparing of the nasolabial fold areas, mimicking the butterfly rash as seen in systemic lupus erythematosus on his cheeks, accompanied by comedones, papules, and pustules. Atrophic and hypertrophic scars were also noted. On the second visit (e–h), mild improvement was seen.

a Histopathological section. Circle: infiltrate of lymphocytes, histiocytes, and neutrophils in the dermis and periadnexal area. Arrow: fibrosis at the border of the incision. Cross: foreign body granuloma. Mild spongiosis on epidermal layer. HE. ×40. b, c Dermoscopic findings from the atrophic scars on the left cheek (b) and right cheek (c) showed hypopigmentation in the central area and an erythematous appearance in the border zone.

The patient was treated with topical alpha-hydroxy acid 10% lotion in the morning and evening, topical benzoyl peroxide and clindamycin gel on the lesion, topical retinoic acid 0.05% cream applied to the entire face at night, and glycolic acid face soap. An intralesional injection of 0.5 mL triamcinolone acetonide 10 mg/mL was also administered once a week for the management of the hypertrophic scar.

On the next follow-up, the laboratory results revealed a positive antinuclear antibody with a titer of 1:100 and a speckled pattern. The other laboratory results were within normal limits. Histopathological examination revealed mild spongiosis and neutrophil infiltrate in the epidermal layer, mixed infiltrate of lymphocytes, histiocytes, and neutrophils, a couple of foreign bodies’ granuloma in the dermal layer, and fibrotic tissue at the border of incision. Consistent with the results, the patient was subsequently diagnosed as having severe acne vulgaris with atrophic and hypertrophic scars. Immunoglobulin (IgA, IgM, and IgG), C3 and C1q, and fibrinogen deposit were negative according to DIF staining examination (Fig. ​(Fig.22).

On his second visit, some improvements were observed: fewer comedones, papules, and pustules; a more diffuse erythematous base; and minimal shrinkage of the hypertrophic scars (Fig. ​(Fig.11).

Our patient showed both comedonal and inflammatory acne on his forehead, nose, and cheeks. He often popped the papules and pustules until pits were formed, resulting in scar development. Along with atrophic and hypertrophic scars, the lesions on both of his cheeks resembled the butterfly rash found in CLE. Although relatively rare, acneiform presentation of CLE has been reported in some instances [6]. As in our patient, the butterfly rash-like sign with sparing on the nasolabial folds (without crossing the bridge of the nose) is considered not to be preceded by the pathogenesis of CLE, particularly due to absence of a rash on the bridge of the nose. The erythematous papules and pustules also left remarkable, settled atrophic and hypertrophic scars unlike those in CLE.

Most commonly, DLE occurs in the 3rd to 4th decades of life. However, although relatively rare, children aged 2–16 years may also be affected. Early lesions of DLE frequently evolve into larger, coin-shaped (“discoid”), confluent, disfiguring plaques of varying size owing to peripheral growth, demonstrating a prominent adherent scale formation. Pigmentary changes are common, especially in dark-skinned people, with hypopigmentation in the central area and hyperpigmented zones at the active border. The skin lesions are generally progressive, and resolution of the lesions leaves more or less evident atrophy and scarring. Symmetrical, butterfly-shaped DLE plaques are occasionally found over the malar areas and the bridge of the nose [6]. Our patient, however, did not show any signs of DLE, as mentioned before. Comedones, erythematous papules, and pustules had preceded the plaque without a scaly surface and had never evolved into a “discoid” shape. On dermoscopic examination, keratotic plugs, a pathognomonic feature of DLE, were not observed on this patient’s atrophic scar [5].

The only associated sign of DLE found in our patient was postinflammatory hypopigmentation in the central area of the lesion. Instead of showing hyperpigmentation, the border of the lesion displayed more of an erythematous coloration (Fig. ​(Fig.2).2). The feature of “whitish structureless areas” represents a fibrotic condition and is often seen in post-acne atrophic scars [2]. In our patient’s histopathological findings, DLE-specific features (hyperkeratosis with follicular plugging, epidermal depletion, rete ridge extension, and basal degeneration) were not found (Fig. ​(Fig.2a).2a). The absence of these features led to a more accurate description of the lesion as fibrotic tissue in post-acne atrophic scarring, consistent with the diagnosis of acne vulgaris. Immunoglobulin and complement deposits were also not found on microscopic examination with DIF staining.

By referring to the American College of Rheumatology (ACR) criteria for SLE, our patient’s conditions did not meet any of the clinical criteria of the Systemic Lupus International Collaborating Clinics (SLICC) for SLE [7]. Based on the prior clinical and laboratory findings in our patients, the diagnosis of CLE was excluded and our patient was diagnosed as having moderate acne vulgaris with atrophic and hypertrophic scars.

This case report has several considerable strengths. It thoroughly discussed the essential findings of adolescent acne, as well as similarities to and differences from differential diagnoses based on the latest consensus and references. This case could serve as a basis for a proper diagnostic approach to these disorders, especially adolescent acne mimicking CLE.

In our case, establishing a diagnosis of adolescent acne mimicking CLE was challenging due to the obscuring clinical presentation of the papules and erythematous plaques on the patient’s cheeks, which mimicked the butterfly (malar) rash of CLE. The diagnosis of SLE was excluded, as the clinical, histopathological, and microscopical findings did not fulfill the criteria of the ACR for SLE. This unusual case highlights the broad spectrum of adolescent acne and the importance of clinical identification of the disease so that unnecessary workups might be avoided.

A written photograph publication consent form was obtained. The study was conducted ethically in accordance with the World Medical Association Declaration of Helsinki.

The authors report no conflicts of interest related to this work.

There is no funding source that supported this work.

Each person named as an author has made substantial contributions to the paper. I.B.S.S. conceived and designed the work; wrote the initial draft of the manuscript and interpretation of the data; revised it critically for important intellectual content; and takes primary responsibility for communication with the journal during manuscript submission, peer review, and publication. A.M.R. assisted in the preparation of the manuscript. All authors approved the final version of the manuscript, and agree to be accountable for all aspects of the work in ensuring that questions related to the accuracy or integrity of any part of the work are appropriately investigated and resolved.