This was a prospective, two-group observational longitudinal study of 118 eyes from 59 patients conducted at Laxmi Eye Institute, Panvel, India. We evaluated the patients at 1, 3, and 6 months. We assessed visual acuity, contrast sensitivity, higher-order aberrations, reading speed, defocus curve, stereopsis, quality of life (QOL), and adverse events in these participants.

We found that the Eyecryl and AcrySof groups were comparable for best-corrected visual acuity, photopic contrast sensitivity, defocus curve, reading parameters, stereopsis, and quality of vision. However, the Eyecryl group had better mesopic contrast and a lower proportion of unwanted images. Psychosocial quality of life was significantly better in the Eyecryl group; however, satisfaction was similar between groups. The cost of one of the lenses is less than the other. Thus, individuals with limited resources may opt for the Eyecryl™ ACTV, with similar visual outcomes.

In patients with bilateral cataracts, the surgeon may select one IOL for distance and another IOL for near vision—monovision. However, this choice does not allow bilateral stimulation of the visual cortex; thus, the patient loses the binocular advantage [2]. Because it is difficult to evaluate the acceptability of monovision pre-operatively due to the presence of cataract, it may not be possible to predict visual satisfaction post-surgery. Therefore, this may not be the procedure of choice in bilateral cataract surgeries.

To overcome these concerns, multifocal IOLs (MFIOLs) are an effective method to re-establish pseudo-accommodation after cataract surgery. Because of the multiple foci, these IOLs provide adequate vision for activities at multiple distances [3–5]. However, they are also associated with undesirable effects such as glare, halos, and reduced contrast sensitivity. The design of most commercially available MFIOLs may increase the spherical aberration of the eye; thus, the overall retinal image quality and quality of vision can be compromised [6]. Traditional MFIOLs may be a ‘mixed bag’ in cataract surgery. However, a new MFIOL, the AcrySof® IQ ReSTOR® multifocal IOL (Alcon Laboratories, Inc.), has a balanced design, without prioritizing any foci. This is achieved by apodization—gradual reduction of the height of the diffractive steps from the centre to the periphery and inclusion of a combination of diffractive-refractive design. Another MFIOL, the Eyecryl™ ACTV diffractive multifocal IOL (Biotech Vision Care Pvt Ltd.), is designed to prioritize distance and near vision over intermediate vision. In addition, the image clarity increases with negative aberrations; the negative spherical aberration induced by the lens compensates for the positive spherical aberration of the cornea.

In addition to good vision, it is important that optimal reading ability is achieved with MFIOL implantation. This can be assessed by reading acuity, reading speed, and contrast sensitivity—features that are important in one’s ability to read adequately. Finally, all these visual outcomes should be able to improve the quality of life in these patients. With this background, this study aimed to compare the vision, reading ability, and quality of life in patients bilaterally implanted with two different types of MFIOLs (group 1: Eyecryl™ ACTV and group 2: AcrySof® IQ ReSTOR®).

This is a prospective, two-group comparison longitudinal study of 118 eyes from 59 patients conducted at the Laxmi Eye Institute, Panvel, Maharashtra, India.

Consecutive consenting patients scheduled for cataract surgery were enrolled in the study and followed up for 6 months. The inclusion criteria were as follows: age greater than 18 years; regular corneal topography; pre-operative and post-operative corneal astigmatism of ≤ 0.75 D, and clear intraocular media; availability, willingness, and sufficient cognitive awareness to comply with examination procedures; and written informed consent for participation in the study. The exclusion criteria were as follows: pupil size > 5 mm scotopic size; best-corrected vision less than 6/9 and/or N/6; previous ocular surgery; ocular pathologies such as diabetic retinopathy, macular degeneration, glaucoma with field defects, or irregular corneal astigmatism; subjects who were professional pilots or truck/car drivers. Since we wanted to implant the IOLs bilaterally, the patients were enrolled only after both eyes fulfilled the inclusion criteria and had no exclusion criteria.

Patients who chose either of these MFIOLs were included in the study. The lenses were not assigned; rather the patients chose the lens based on their personal preference after the properties of lenses were explained to them by the counsellor. One MFIOL (group 2) is an apodized, diffractive single piece, foldable, hydrophobic acrylic, posterior-chamber IOL. This IOL has a 3.6 mm apodized central part and nine diffractive concentric zones on the anterior surface; these features provide one optical power for distance vision and a separate power for near vision. The add power of this MFIOL is +3.0 D at the lens plane, which provides about 2.5 D of add power at the spectacle plane. The recent advances in apodization technology ensure a gradual reduction in the height of diffractive steps from the centre to the periphery of the lens; this creates a smooth transition of light at various focal points, i.e. distance, intermediate, and near [4, 5, 7, 8].

The other MFIOL (group 1) is a single piece, natural yellow, with a central refractive zone and a diffractive zone surrounding it, followed by a peripheral refractive area. The IOL has a series of nine concentric rings with diffractive steps on the anterior surface of the lens, and the spacing between the steps reduces progressively from the centre to the periphery. The add power of this MFIOL is +3.0 D at the IOL plane, which provides about 2.4 D of add power at the spectacle plane [9]. The properties of both these MFIOLs are presented in Table ​Table11.

The properties of the two IOLs included in the present study

The cataract surgery was performed by small-incision phacoemulsification with IOL implantation by the same surgeon. We created a clear corneal tunnel 2.8 mm in size with a curvilinear capsulorhexis. After phacoemulsification and automated irrigation/aspiration of the cortical remnants, we implanted the IOL in the capsular bag and sealed the incision wound by hydration without the help of a suture. The post-operative treatment consisted of topical moxifloxacin hydrochloride 0.5% eye drops four times a day for 10 days and prednisolone acetate 1% eye drops six times daily, with weekly tapering. All cataract surgeries were uneventful.

All patients were followed at 1, 3, and 6 months. The two primary outcome measures were (1) visual acuity [uncorrected—distance, intermediate and near, best-corrected distance visual acuity (BCDVA), and distance-corrected near visual acuity (DCNVA)] using the logMAR scale; (2) contrast sensitivity measured binocularly with distance correction under photopic (85 candelas [cd]/m2) and mesopic (3 cd/m2) conditions on a Pelli-Robson chart at a distance of 1 m. The secondary outcomes were as follows: (1) Higher-order aberrations (HOA) such as coma, spherical, trefoil, and secondary astigmatism were measured for internal, corneal, and total values at 2 and 4 mm pupil size to simulate photopic and mesopic conditions using the HOYA iTrace ray-tracing system (Tracey Technologies, Houston, TX, USA). (2) Reading speed was measured using the MNREAD chart in two illuminations, i.e. > 100 lx and < 100 lx. (3) Defocus curves for each MFIOL were obtained by plotting the mean of visual acuity with 13 values of defocus from +2.0 D to −4.0 D on the ETDRS chart in logMAR units. The defocus curve simulates the patient’s binocular visual acuity at different distances by placing positive and negative lenses in 0.5 D increments in front of the patient’s eyes. The measurements were performed by adding the lenses to the BCDVA. (4) Stereopsis in arc seconds was assessed by the Titmus Stereo Fly test, which measures how minutely the two eyes can discern differences in the distance of objects from the observer.

We also assessed visual quality of life (QOL) using the 33-item Indian Vision Functioning Questionnaire (IND-VFQ-33) at 3 months. The VFQ-33 has a total of 33 questions divided into three categories—general, psychosocial, and visual [10]. A score is given to each answer, and a higher score indicates poorer QOL. We also asked questions regarding patient experience of unwanted images, satisfaction with vision, and disappointment due to unwanted images [11, 12]. Finally, we recorded any side effects or complications over this 6-month period.

Data were entered in Stata version 15 software (StataCorp LLC, College Station, TX, USA). We estimated the means and standard deviations (SD), and median and interquartile range (IQR) for continuous variables. The normality of the data was assessed by the Shapiro–Wilk test. We estimated the proportions for categorical variables. The means were compared using the t test and the medians were compared using the Mann–Whitney test. The proportions were compared using the chi-square test or Fisher’s exact test for low expected cell counts. To account for changes in illumination, we adjusted the means for illumination values. We had a power of more than 80% to detect a difference of 0.06 units (in logMAR values) between these two groups (with an alpha value of 0.05). A p value of < 0.05 was considered statistically significant. The study was approved by the Institutional Ethics Committee at Laxmi Eye Institute and Laxmi Charitable Trust ECR/578/Inst/MH/2014/RR-17; LEI/001/2017. The study was conducted according to the principles of the Declaration of Helsinki of 1964, and all participants signed an informed consent form.

aAge and gender were based on the total number of individuals 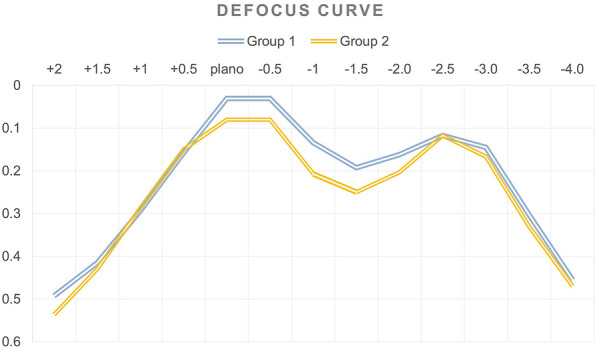 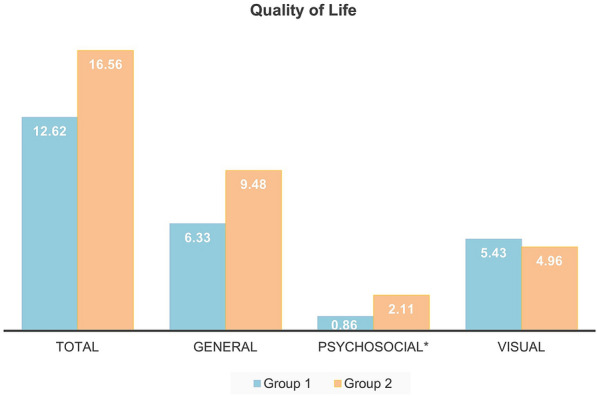 We did not record any complications such as inflammation or corneal edema in any patient at the 6-month visit.