Renal resistive index (RRI) is a parameter determined by Doppler sonography that reflects renal hemodynamics. Significant relationships connecting increases in the RRI with cardiovascular risk factors and the incidence of cardiovascular disease in hypertensive patients have been reported. This cross-sectional study aimed to clarify the relationship between cardio-ankle vascular index (CAVI), a novel marker of arterial stiffness, and the RRI in patients with essential hypertension with the goal of primary prevention of cardiovascular disease.

The study included 245 patients undergoing treatment for essential hypertension (95 men and 150 women; mean age ± standard deviation, 65 ± 13 years) with no history of cardiovascular disease. The CAVI and RRI were measured using commercial devices, and their relationships to various clinical parameters were examined.

A significant positive correlation was observed between the CAVI and RRI (r = 0.43, P < 0.001). Multiple regression analyses revealed a value of β of 0.28 (P < 0.001) when CAVI was evaluated as the independent and RRI as the dependent variable. Receiver-operating characteristic curve analysis indicated that the CAVI cutoff point for high RRI (> 0.70) was 9.0 with area under the curve of 0.700 (P < 0.001).

The results from this study indicate that the CAVI varies directly with measures of renal vascular hemodynamics (RRI) in patients with essential hypertension. These findings identified a cardiovascular risk value of the CAVI from the perspective of renal hemodynamics as 9.0 in this patient population.

Renal function is directly associated with the pathogenesis of hypertension. In clinical practice, renal function can be evaluated using biomarkers such as estimated glomerular filtration rate (eGFR) and urinary protein or albumin concentration. These biomarkers have also been established as important predictors for cardiovascular events [1, 2]. Recent clinical studies have indicated that the renal resistive index (RRI) is also a useful and novel marker for evaluating renal function [3]; the RRI reflects renal hemodynamics and is determined using Doppler sonography. Several groups have reported associations linking RRI to cardiovascular risk factors or incidence of cardiovascular disease in hypertensive patients [4-6].

The cardio-ankle vascular index (CAVI) is a novel physiological marker of arteriosclerosis that reflects the stiffness of the aorta and the femoral and tibial arteries and is not affected by blood pressure measurements [7]. A number of clinical studies have revealed the importance of the CAVI as a marker for cardiovascular risk factors [8-11], and other groups have documented significant relationships between the CAVI and markers of renal function such as eGFR and urinary albumin concentration [12, 13]. Taken together, these results suggest that the CAVI provides a reflection of renal hemodynamics. However, at present, limited information is available regarding the relationships between CAVI and RRI in hypertensive patients. This study examined the relationship between the CAVI and RRI in patients with essential hypertension with the goal of primary prevention of cardiovascular disease.

This cross-sectional study was conducted at the Hitsumoto Medical Clinic in the city of Shimonoseki in Japan from June 2017 to May 2019. The study population comprised 245 outpatients receiving treatment for essential hypertension who successfully underwent procedures for determination of the CAVI and an ultrasonographic examination to obtain the RRI. Exclusion criteria included a history of cardiovascular disease, including stroke, coronary artery disease and/or peripheral arterial disease. Patients with a history of renal artery stenosis, acute renal insufficiency and/or end-stage renal disease were also excluded from this study. The patient population included 95 men and 150 women with a mean age ± standard deviation (SD) of 65 ± 13 years. The study was approved by the Institutional Review Board of the Hitsumoto Medical Clinic (approval number 2017-05) and was conducted in compliance with the Declaration of Helsinki.

The CAVI was measured for each patient using a Vascular Screening System (VaSera) instrument (Fukuda Denshi Co., Ltd, Tokyo, Japan) as described in previous reports [7]. Briefly, the brachial and ankle pulse waves were determined using inflatable cuffs with the pressure maintained between 30 and 50 mm Hg to ensure minimal impact on systemic hemodynamics. Systemic blood and pulse pressures were determined simultaneously with the participant in the supine position and after a 10-min rest period. CAVI was calculated using the following formula: CAVI = a{(2ρ/ΔP) × ln(Ps/Pd) × PWV2} + b, where a and b are constants, ρ is blood density, ΔP is Ps – Pd, Ps is systolic blood pressure, Pd is diastolic blood pressure and PWV is pulse wave velocity. The average coefficient of variation was < 5%; this value is small enough for clinical application and indicates good reproducibility [7].

Determination of RRI by ultrasonography

The RRI was determined by ultrasonography performed using a high-resolution ultrasonographic scanner with a 3.0-MHz convex array probe (HI VISION Avius, Hitachi Medical Corporation, Tokyo, Japan) as previously reported [14]. Briefly, RRI was measured in three segmental arteries (superior, middle and inferior) of each kidney; all results were averaged to generate a mean value for each patient. RRI was calculated from the peak systolic and end-diastolic velocities using the following equation: (peak systolic velocity – end-diastolic velocity)/peak systolic velocity. All measurements were performed by an experienced physician who did not have access to other patient-related data.

Obesity was estimated for each participant using body mass index (weight (in kg)/height (in m2)). A participant was defined as a smoker if he/she smoked at least one cigarette per day during the previous 28 days. Right brachial blood pressure was measured twice with a mercury sphygmomanometer with the participant in a sitting position; an average of two independent readings was used to determine systolic and diastolic blood pressures. Diabetes mellitus was defined as a fasting blood glucose ≥ 126 mg/dL, hemoglobin A1c ≥ 6.5% and/or the ongoing use of antidiabetic medications or exogenous insulin. Dyslipidemia was defined as low-density lipoprotein cholesterol ≥ 140 mg/dL, high-density lipoprotein cholesterol ≤ 40 mg/dL, triglycerides ≥ 150 mg/dL and/or current use of lipid-lowering medication. Blood samples were collected from the antecubital veins in the morning after 12 h of fasting. Blood glucose, serum lipid and creatinine levels, and oxidative stress markers were measured using standard laboratory procedures. The estimated glomerular filtration rate (eGFR) was calculated using the adjusted Modification of Diet in Renal Disease Study equation proposed by the working group of the Japanese Chronic Kidney Disease Initiative [15]. Oxidative stress markers were evaluated by testing reactive oxygen metabolites (d-ROMs; Diacron, Grosseto, Italy) [16].

Table 1 summarizes the patient characteristics. The mean RRI ± SD was 0.69 ± 0.07 (range, 0.52 – 0.87), and the mean CAVI ± SD was 8.7 ± 1.4 (range, 6.2 – 13.8), both with near normal distributions. Table 2 shows the comparisons of clinical parameters of the calcium channel blocker (CCB) use and renin-angiotensin system (RAS) inhibitor use patients. RRI and CAVI were significantly lower in patients with RAS inhibitor use than in those with CCB use.

Characteristics of Patients
Open in a separate window 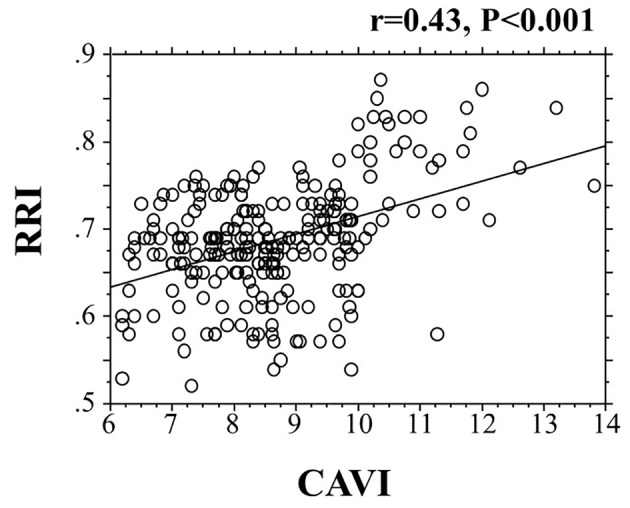 The correlation between the CAVI and the RRI. CAVI: cardio-ankle vascular index; RRI: renal resistive index.

Relationship Between RRI, CAVI and Various Clinical Parameters
Open in a separate window

Multiple Regression Analyses for RRI
Open in a separate window 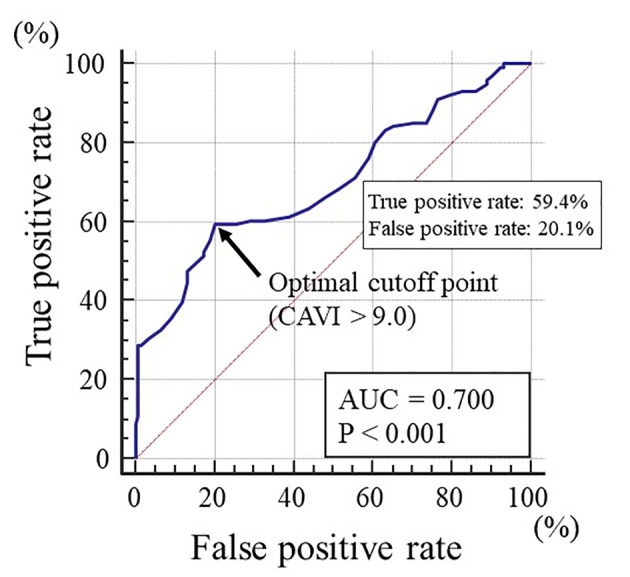 The receiver-operating characteristic curve analysis for the detection of high RRI based on the CAVI. The maximum Youden’s index indicated that a CAVI of > 9.0 was the optimal cutoff point for the determination of high RRI (area under the curve = 0.700, P < 0.001), with a true positive rate of 59.4% and a false positive rate of 20.1%. RRI: renal resistive index; CAVI: cardio-ankle vascular index; AUC: area under the curve.