Sutureless bioprosthetic valves such as the Sorin Perceval S valve (SPV) have been used in patients with aortic stenosis that require surgical aortic valve replacement (SAVR). These prostheses have been marketed on the basis of their rapid implantation techniques with avoidance of sutures and reduced aortic cross-clamp times. We report a case of an early failure of a SPV nearly 4 years after implantation in a 58-year-old woman who was low-risk. While the patient’s symptoms initially improved with SAVR with a sutureless bioprosthetic valve, they progressively worsened as the valve degraded, and the leaflets became increasingly calcified and stenotic ultimately, requiring reoperative SAVR with a St. Jude mechanical valve. This case raises the issue of the lack of much-needed data describing the long-term durability and hemodynamic performance of these valves, particularly in a low-risk patient with excellent functional status. We hope to shed further insight into the lack of long-term studies on patients with SPV to assess their longevity and long-term effectiveness, as well as elucidation of possible prevention and monitoring of these potential complications. The use of newer generation prostheses, although attractive for their ease of implantation, potentially carries higher long-term risk due to shorter durability leading to reintervention to address valve deterioration. This is especially true in low-risk patients who are young and active. Cardiology and cardiothoracic surgery societies need to develop a universal registry with follow-up of all valves in order to track and study the durability of these valves, and to evaluate for incidence of known and potential complications.

Aortic stenosis (AS) is a restriction in the movement of the aortic valve leaflets, with consequent obstruction to the flow of blood. The characteristic presenting symptoms are classically dyspnea, syncope and chest pain [1]. The gold standard treatment for symptomatic AS is surgical aortic valve replacement (SAVR) [2, 3]. Classically there are two types of prosthetic valves used in the management of this disease: mechanical and bioprosthetic. Mechanical prostheses have the advantage of very long durability, proven over several decades and thousands of patient-years of follow-up. They however require lifelong anticoagulation to prevent thromboembolism and consequently expose the patient to bleeding complications. Bioprosthetic valves have become increasingly favorable as they do not require lifelong anticoagulation due the decreased risk of thromboembolic events compared to mechanical heart valves [4].

Sutureless bioprosthetic valves such as the Sorin Perceval valve (Sorin Biomedica Cardio Srl, Saluggia, Italy) have been used in patients with AS that required SAVR. They have been marketed on the attractive feature that it does not require sutures during implantation. It is a self-expanding bioprosthetic valve comprised of leaflets made of bovine pericardium mounted within a self-expanding, super elastic nitinol alloy stent frame [5, 6]. As these valves are relatively new on the market, their long-term durability has yet to be fully established. We describe a failed Sorin Perceval S valve (SPV) that was replaced surgically with a St. Jude mechanical valve.

A 58-year-old female with a past medical history of SAVR 4 years prior with SPV due to calcific AS, history of myocardial infarction status post percutaneous coronary intervention to the right coronary artery, hypertension, chronic obstructive pulmonary disease, obstructive sleep apnea, Crohn’s disease, thalassemia trait, and gastroesophageal reflux presented with progressive exertional dyspnea, paroxysmal nocturnal dyspnea, and chest discomfort for the past 6 months. Her medications included amlodipine, losartan, furosemide, aspirin, clopidogrel, metoprolol succinate, atorvastatin, pantoprazole, and budesonide/formoterol. Her calcium was 8.9 mg/dL and phosphorus was 3.6 mg/dL. Her creatinine was 0.8 mg/dL with a glomerular filtration rate of 81 mL/min/1.73m2. B-type natriuretic peptide (BNP) was 6,960 pg/mL. Her hemoglobin was 11.7 g/dL and hematocrit was 35.6%. Prothrombin time (PT) was 11.6 s, activated partial thromboplastin time was 26.7 s and international normalized ratio (INR) was 1.07, which were around her baseline. All other routine lab work including cardiac enzymes was unremarkable. Chest X-ray showed bilateral interstitial opacities. An electrocardiogram (ECG) showed normal sinus rhythm. Transthoracic echocardiogram revealed bioprosthetic AS with a peak aortic velocity of 4.83 m/s, a peak transaortic gradient of 93.39 mm Hg (Fig. 1a), a mean transaortic gradient of 53.0 mm Hg, an aortic valve area of 0.62 cm2, mild to moderate mitral valve regurgitation, left ventricular ejection fraction of 60%, and severe aortic root calcification (Fig. 1b) (Video 1, www.cardiologyres.org).

Valve-in-valve (ViV)-TAVR was considered by the structural heart team, but given the patient’s young age, excellent functional status, and potential for requiring another aortic valve repair (AVR) in her lifetime, it was decided that SAVR with a mechanical valve was a better option. A transesophageal echocardiogram showed no evidence of infective endocarditis but demonstrated significant calcified pannus, which raised concern for risk of embolization with TAVR. The patient’s Society of Thoracic Surgeons (STS) score was calculated to be 4%. Cardiac catheterization showed no significant coronary artery disease.

The patient underwent a successful reoperative SAVR with a 23-mm St. Jude mechanical aortic valve via sternotomy. Intraoperatively, the SPV was explanted and severely calcified, and stiffened leaflets were noted, consistent with the echocardiogram (Fig. 2) (Video 2, www.cardiologyres.org). The patient was started on anticoagulation with coumadin for the St. Jude mechanical valve. She felt marked relief in her symptoms to the extent of no longer requiring continuous positive airway pressure therapy for her obstructive sleep apnea. 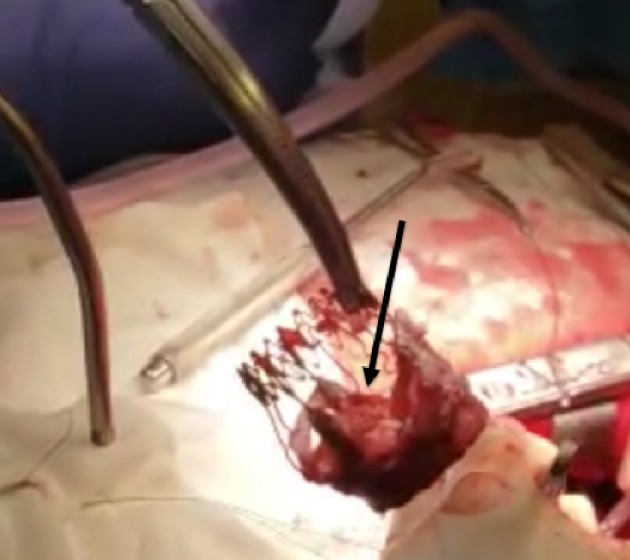