Find articles by Luigi Auricchio
Author information Copyright and License information Disclaimer
aDepartment of Dermatology, Federico II University, Naples, Italy
bDepartment of Biomorphological and Functional Sciences, Federico II University, Naples, Italy
*Massimiliano Scalvenzi, MD, Department of Dermatology, Federico II University, Via S. Pansini 5, IT–80131 Napoli (Italy), Tel./Fax +39 081 746 2364, E-Mail ti.aninu@znevlacs
Copyright © 2009 by S. Karger AG, Basel
This is an Open Access article distributed under the terms of the Creative Commons Attribution-Noncommercial-No-Derivative-Works License (http://creativecommons.org/licenses/by-nc-nd/3.0/). Users may download, print and share this work on the Internet for noncommercial purposes only, provided the original work is properly cited, and a link to the original work on http://www.karger.com as well as the terms of this license are included in any shared versions.

Tungiasis is a neglected parasitic skin disease caused by the permanent penetration of the female sand flea Tunga penetrans (also called jigger flea) into the skin of its host. Growing urbanisation, improved housing and the use of appropriate footwear have presumably led to an overall reduction of the occurrence of this ectoparasitosis within the last few decades. However, it is still highly prevalent in regions where people live in extreme poverty, such as in many Latin American and African countries [1, 2]. We report the case of a 44-year-old woman who returned from an excursion trip to Kenya’s savannah with an infection of T. penetrans located on her right big toe around the nail. The natural history, pathology, epidemiology, diagnosis, therapy and control of this parasitic skin disease are discussed [1].

Tungiasis is a cutaneous ectoparasitic infestation by the female sand flea Tunga penetrans. It is predominantly a health problem in the tropical areas of Latin America and Africa [3]. It is more common in places with poor hygiene and is closely associated with domestic animals (mainly pigs, dogs, and cattle) [4]. This ectoparasite is usually acquired by walking barefoot on the sandy soil of disease-endemic regions [5]. However, an increasing number of travellers returning home, immigrants, and children adopted from the mentioned regions are also affected in non-tropical countries [3]. This parasitic disease is apparently native to Latin America, from where it spread in 1973 through the infected crew of a British ship sailing from the coast of South America. When it arrived in Angola, there was a large outbreak on the African continent [6].

The main habitat of the sand flea is warm, dry soil and the sand of beaches, stables, and stock farms. Upon contact, the fleas invade unprotected skin. The most common site of involvement is the feet (the interdigital skin and the subungual area). The flea has limited jumping ability.

We report the case of a 44-year-old woman who returned from an excursion to Kenya’s savannah and arrived at our ambulatory unit with a painful papule located on her right big toe around the nail. The lesion showed a peripheral white area of hyperkeratosis with a central grey-bluish spot (fig. 1). 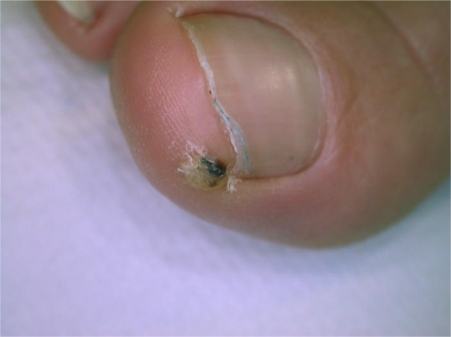 The lesion showed a peripheral white area of hyperkeratosis with a central grey-bluish spot, located on the right big toe.

The major diameter of the lesion was 1 cm. We performed a dermoscopic examination that showed a brownish opening of the flea on the periungual area. In the central area, the lesion showed grey-blue blotches and variable whitish structures that presented a chain-like appearance near the abdomen of the flea (fig. 2). 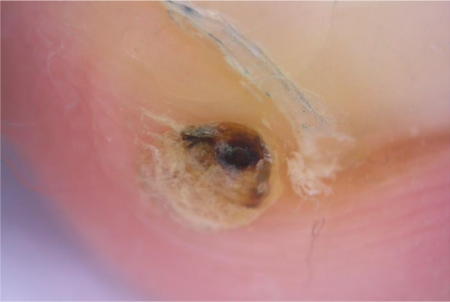 In the central area, the lesion showed grey-blue blotches and variable whitish structures that formed a chain-like picture near the abdomen of the flea.

Several days later, we performed a surgical excision of this lesion under aseptic conditions, and a histological examination confirmed the diagnosis of tungiasis.

The histopathological examination showed hyperkeratosis, parakeratosis, and acanthosis. The body of the flea was localised in the upper dermis and was surrounded by a pseudo-cystic cavity. Inside the cavity, annular-shaped digestive and respiratory organs as well as ovaries rich in eggs could be observed. The eggs were oval or, less frequently, round with a thickened wall and pale centre (fig. 3). A perilesional inflammatory infiltrate, mainly consisting of lymphocytes, neutrophils, and numerous eosinophils, was also present.

The body of the flea is localised in the upper dermis and surrounded by a pseudo-cystic cavity. Inside the cavity, annular-shaped digestive and respiratory organs as well as ovaries rich in eggs may be observed. EE-stained, ×100.

T. penetrans is a small flea of about 1 mm in length. The larva emerges on the 3rd to 4th day after the egg is laid and pupates between the 10th and 18th day. Larvae are found in various types of soil, although dry and sandy ground seems to be particularly suited to their development [2].

The Tunga male and female fleas are hematophagous [6], and they can jump up to 20 cm vertically and crawl or run up to 1 cm per second. The male does not burrow into the host and dies after copulation. However, the female flea burrows into the host’s epidermis, where it can grow as large as 1 cm while its fertilised eggs mature [5]. Females lay 150–200 eggs over a period of 2–3 weeks and then die. Most of the eggs will fall to the ground where the larvae hatch within 3–4 days. The larvae develop into pupae 10–15 days later, and the pupae reach adulthood after an additional 5–14 days. Under optimal conditions, the transition from egg to adult can be as brief as 18 days [5].

After expulsion of the eggs, the involution of the lesion begins. About 3 weeks after penetration, the fleas die and eventually are sloughed from the epidermis by skin repair mechanisms. It is important to understand that infestation with T. penetrans is a dynamic process with lesions that continuously alter their morphological appearance [1]. It most commonly affects the feet, although the involved region depends on the point of contact with the sand.

The clinical history of tungiasis has been divided into five stages, the so-called Fortaleza Classification. In stage I, the flea is in statu penetrandi (30 min to several hours), and a reddish spot of about 1 mm appears. In stage II, hypertrophy begins, and the parasite becomes more obvious as a growing whitish or mother-of-pearl-like nodule (1–2 days after penetration). In the protruding rear cone of the flea, the anal-genital opening appears as a central black dot. The lesion is surrounded by erythema. In stage III, hypertrophy is maximal and becomes macroscopically visible; this occurs 2 days to 3 weeks after penetration. A round, watch glass-like patch also appears that is frequently accompanied by hyperkeratosis and desquamation of the surrounding skin. Expulsion of the eggs and faeces is typical in this stage. The lesions are usually painful and produce the sensation of foreign bodies expanding under the skin. In stage IV, a black crust covers the involuted lesion with the dead parasite (3–5 weeks after penetration). A residual scar in the stratum corneum is characteristic for stage V (6 weeks to several months after penetration). The usual sequence of development of the neosome, involution of the lesion and stage V formation may be changed by superinfection or manipulation of the lesion by the patient or care facility [1]. Tungiasis causes a mixed Th1 and Th2 immune response, characterised by increased concentrations of interferon-γ and tumour necrosis factor-α as well as a slight increase of interleukin-4 [6].

The characteristic localisations of tungiasis are the toes, peri- and subungual folds, interdigital folds, the sole, and the heel. Due to pain, these localisations can cause a marked limitation in walking. Other sites may be involved, such as the elbows, wrists, hands, breasts, back, buttocks, thighs, knees, and legs [6].

The T. penetrans infestation presents with papular or nodular lesions, either single or multiple (some cases with dozens, sometimes even hundreds, of lesions have been described), that are white, grey or yellowish in colour, with a small brown-black central opening corresponding to the posterior portion of the abdomen of the flea. Furthermore, less common clinical varieties were described: plantar wart-like lesions as well as crusted, bullous, pustular, and ulcerative lesions. The whole process, from the penetration of the gravid female to the healing, takes 4–6 weeks [6]. The penetration of T. penetrans is asymptomatic: it is only when the insect increases in size that the inflammatory phenomena develop, leading to pain and/or pruritus [6].

Reported topical treatments include cryotherapy or electrodesiccation of the nodules. Application of formaldehyde, chloroform, or dichlorodiphenyltrichloroethane to the infested skin has been used, but it may cause morbidity in the patient. Topical ivermectin, metrifonate, and thiabendazole have also been reported to be effective. Occlusive petrolatum suffocates the organism. Twenty-percent salicylated petroleum jelly (Vaseline) applied for 12–24 h in profound infestations caused the death of the fleas and facilitated their manual removal. These treatments do not remove the flea from the skin and do not result in quick relief from the painful lesions. The flea may also be gently removed with a needle or a forceps, but definitive treatments consist of sterile curettage or excision.

Tungiasis can also heal spontaneously if the female dies within the skin or emerges on her own. In addition, the patient’s tetanus vaccination status should be confirmed in all cases. Prophylaxis for travellers consists of avoiding walking barefoot in endemic areas and the use of insecticides.

The rarity of tungiasis and the resulting unfamiliarity of dermatologists with this infestation in non-endemic areas may lead to diagnostic problems. With increasing travel and globalisation, tungiasis will also have implications for Europe, the USA, and Australia.

Meanwhile, dermatologists may face tungiasis in several groups, such as children adopted from the mentioned regions, immigrants, and travellers returning home. It is also possible that T. penetrans may further disseminate to new geographical areas as a stowaway, as it has done before. Without doubt, awareness of T. penetrans should also be extended to non-endemic areas [3].