Erdheim-Chester disease (ECD) is a rare multisystem non-Langerhans cell histiocytosis characterized by systemic xanthogranulomatous infiltration from histiocytes [1, 2]. This disease was first described by Erdheim and Chester in 1930 [3]. The number of cases reporting this disease is small (less than 600), but it has had dramatically increased in recent years, maybe by the increased diagnostic methods available, which enhances the recognition of the disease [4]. Patients with ECD commonly present in the fifth decade; however, pediatric and geriatric presentations have also been reported. ECD results from xanthogranulomatous infiltration of foamy histiocytes; these cells are positive for CD68, negative for CD1a, and in 80% of the cases negative for S100 [5]. ECD manifests as long bone infiltrations, exophthalmos, diabetes insipidus, xanthelasma, interstitial lung disease, bilateral adrenal infiltration, retroperitoneal fibrosis with perirenal or ureteral infiltration causing hydronephrosis and renal failure, testicular infiltration, and in exceptional involves the hearth and the central nervous system [6].

The diagnosis of ECD is based on radiologic and histologic criteria. Imaging studies are prompted for the bone pain referred by the patients. X-rays show bilateral symmetric metaphyseal osteosclerosis of long bones. These lesions are considered virtually pathognomonic. The 99mTc Bone Scintigraphy shows symmetric and abnormally strong 99mTc labeling of the distal ends of the long bones. Microscopy of the lesions shows typical ECD histiocytes. These histiocytes are non-Langerhans’ foamy histiocytes, which lack Birbeck granules, nested within a polymorphic granuloma, fibrosis or xanthogranulomatous. Pathological confirmation of CD68+, CD1a- histiocytes is both sufficient and mandatory for the diagnosis of ECD [6].

Specific somatic genetic mutations in the BRAF V600 gene have been reported in around 54% of patients suffering of ECD, rendering a therapeutic target for the kinase inhibitor, vemurafenib [7]. This medication is the only active Food and Drug Administration (FDA) approved treatment for ECD and has demonstrated long-term efficacy in patients with this genetic mutation [8]. Other medications, as dabrafenib (a BRAF V600E inhibitor) and trametinib (a mitogen-activated protein kinase inhibitor), are under study as potential therapeutic options [9].

We present the case of a 53-year-old woman with diabetes insipidus that has been treated with desmopressin for about 8 years, migraine with aura, and known ECD confirmed by biopsy, with possible involvement of the great cardiac vessel and infiltrative cardiomyopathy. Over the past several years, she has dealt with a multitude of intermittently exacerbated symptoms, including headaches, fatigue, lethargy, exertional dyspnea, flushing, and peripheral edema, which have been clinically attributed to mast cell activation. She was admitted twice during the previous year with symptoms of fluid retention that resolved with diuresis. She was diagnosed with ECD 2 months before this admission, with biopsy confirmation from the vertebra and the left femur. She was admitted to our institution for further management of a newly identified large pericardial effusion (Fig. 1) and ascites, accurately to assess the extension of the cardiac involvement by this disease. In the interim, she had complained of intermittent midsternal chest discomfort associated with dry cough and palpitations that worsened while lying flat. 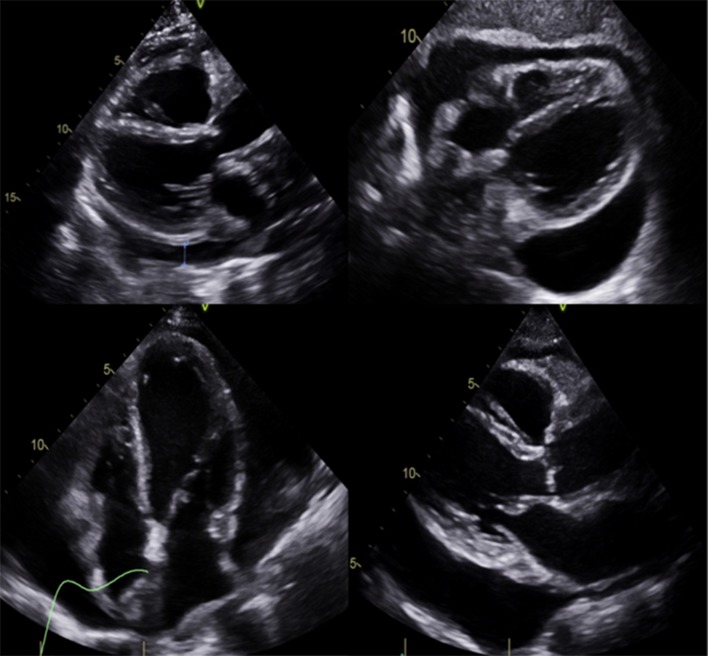 She was found to have an acute right frontal infarct and multifocal stenosis through the vessel imaging modalities. A magnetic resonance imaging (MRI) showed infarction in the right frontal and parietal white matter, while the magnetic resonance angiography (MRA) revealed extensive intracranial stenosis in the anterior circulation. The final cerebral angiogram showed a right internal carotid artery occlusion, likely secondary to fibromuscular dysplasia changes (Fig. 2). Cerebrospinal fluid tests were normal, and the neurology service concluded that these changes were consistent with vasculopathy secondary to ECD with BRAF mutation. 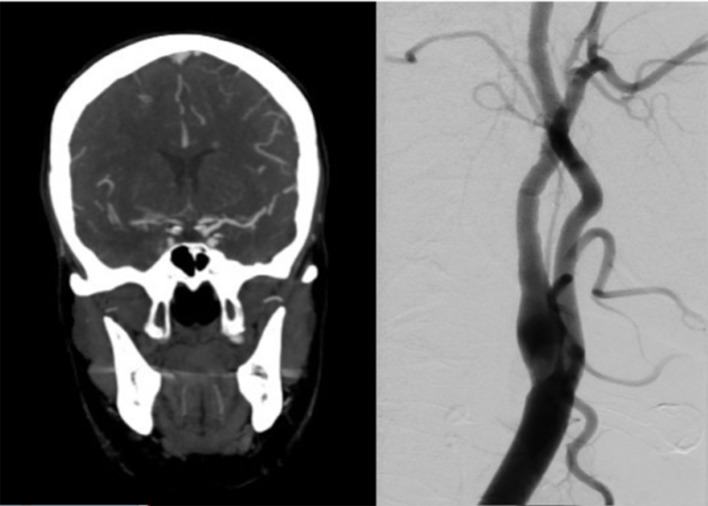 Transesophageal echocardiography (TEE) showed a large circumferential pericardial effusion greater than 2 cm with maximum thickness around the inferior and posterior left ventricle wall with the partial systolic collapse of the right atrium. She had an ejection fraction of 69% and large pericardial effusion without tamponade physiology. After the evacuation of the pericardial effusion via video-assisted thoracoscopic surgery (VATS), there was minimal pericardial effusion remaining. The pathology exam from pericardium showed histiocytic infiltration compatible with ECD, positive for the BRAF mutation. From these findings, it was concluded that the patient was suffering from a vasculopathy related to ECD. She received corticosteroids for the treatment of the histiocytosis caused by ECD.

She continued her desmopressin for her diabetes insipidus, and she was started on daily aspirin and prednisone, along with pantoprazole and vitamin D for stomach and bone protection. A limited echocardiogram 8 days after VATS showed significant improvement in pericardial effusion (Fig. 3). She was discharged on colchicine, bumetanide and bactrim for prophylaxis against Pneumocystis jiroveci pneumonia. Before going home, a cardiac MRI was done to record the extension of the disease and help with future monitoring (Fig. 4). It was planned to start vemurafenib due to the discovery of the BRAF mutation. 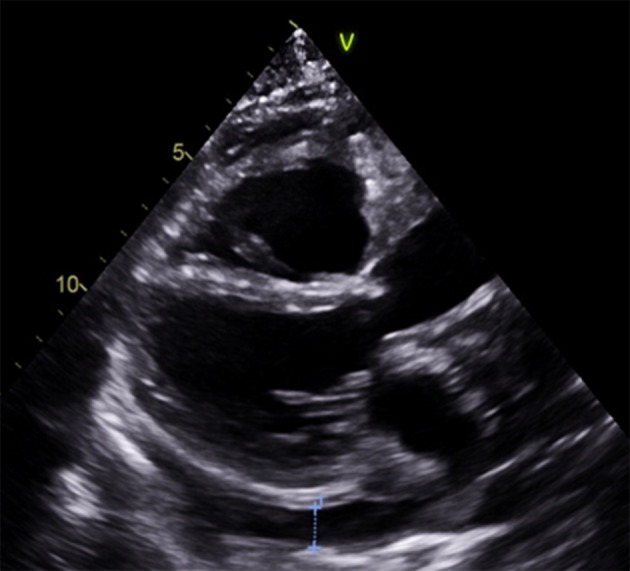 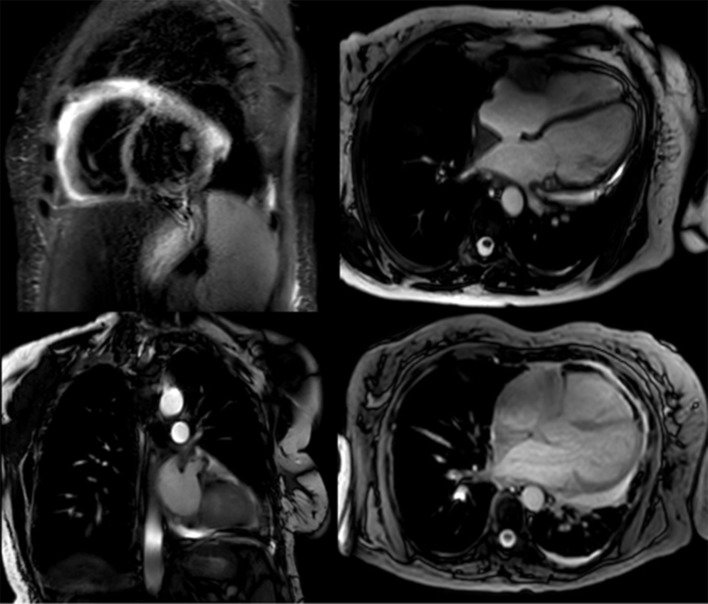 The process developed for the literature review included the following steps.

First, the relevant keywords were established. We conducted a broad search using the terms pericardial effusion and ECD.

Third, article abstracts were reviewed for study eligibility, followed by reviews of full papers in cases in which eligibility was not clear from the abstract review alone. Another 18 full-text articles were excluded. Figure 5 shows the flow diagram according to the Preferred Reporting Items for Systematic Reviews and Meta-Analyses (PRISMA) statement [7]. 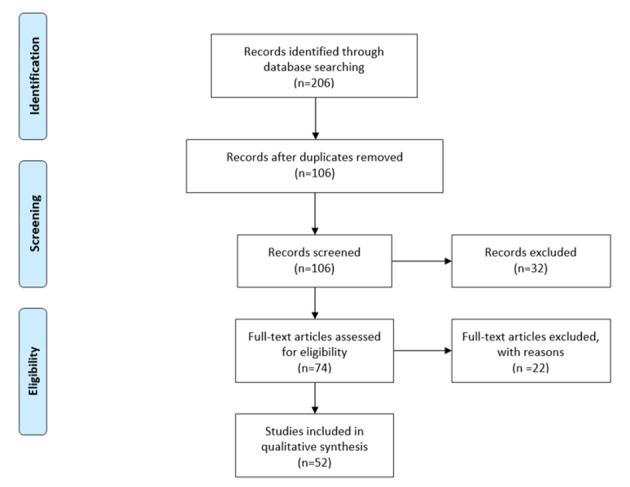 Flow diagram according to the PRISMA statement. PRISMA: Preferred Reporting Items for Systematic Reviews and Meta-Analyses.

Articles were included if they consisted of presentation of pericardial effusion and ECD. Articles were excluded if they were primarily editorials, and solely described study protocols, letters, abstract of congresses or books. The results were summarized in tables.

Characteristics of Articles
Open in a separate window