Katie Stubblefield’s wit shows through when she describes her face transplant surgery.

“Longest nap of my entire life,” she says.

Those unfamiliar with Katie’s still-developing speech pattern may not easily make out those words, but her parents are usually there to interpret. Robb and Alesia Stubblefield have been by her side – helping her “take four steps forward, two steps back,” as Robb describes it – since Katie, then 18, endured severe facial trauma and significant complications from a self-inflicted gunshot wound on March 25, 2014.

And, indeed, it was extensive: The surgery included transplantation of the scalp, the forehead, upper and lower eyelids, eye sockets, nose, upper cheeks, upper jaw and half of lower jaw, upper teeth, lower teeth, partial facial nerves, facial muscles, and skin – with 100 percent of her facial tissue effectively replaced. 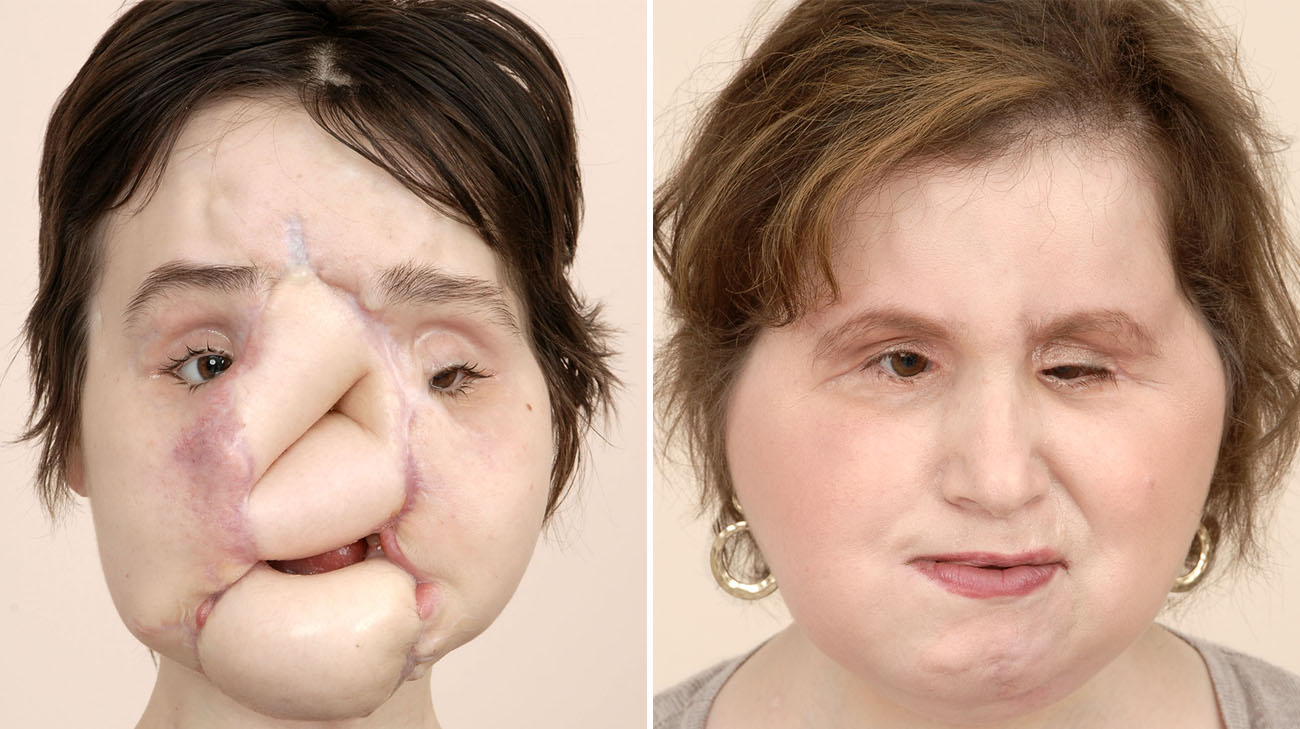 Katie Stubblefield before her face transplant in March 2015 and after in August 2018. (Courtesy: Cleveland Clinic)

Despite the success of the transplant, Katie’s journey is far from over. She currently remains unable to see; so, Katie is learning Braille. She’s also undergone additional surgeries to improve function in her tongue and jaw.

But the path forward – to college (she would like to be a counselor, or a teacher), to independence, and to walking down the street “and blending in,” as Katie describes it – seems reachable at last.

“Katie gets a second chance at life,” said Alesia.

As Katie herself told the Cleveland Clinic Ethics Committee, during a meeting to ensure she was ready for her face transplant surgery: “I can’t go backward. I have to go forward.”

Katie had suffered life-threatening, severely traumatic injuries from her gunshot wound. However, when paramedics arrived a few minutes later, one called out: “She’s alive. We got a pulse.”

While the single bullet pierced through her mouth and nasal cavity, exiting her skull between her eyebrows, it miraculously only grazed her brain tissue. 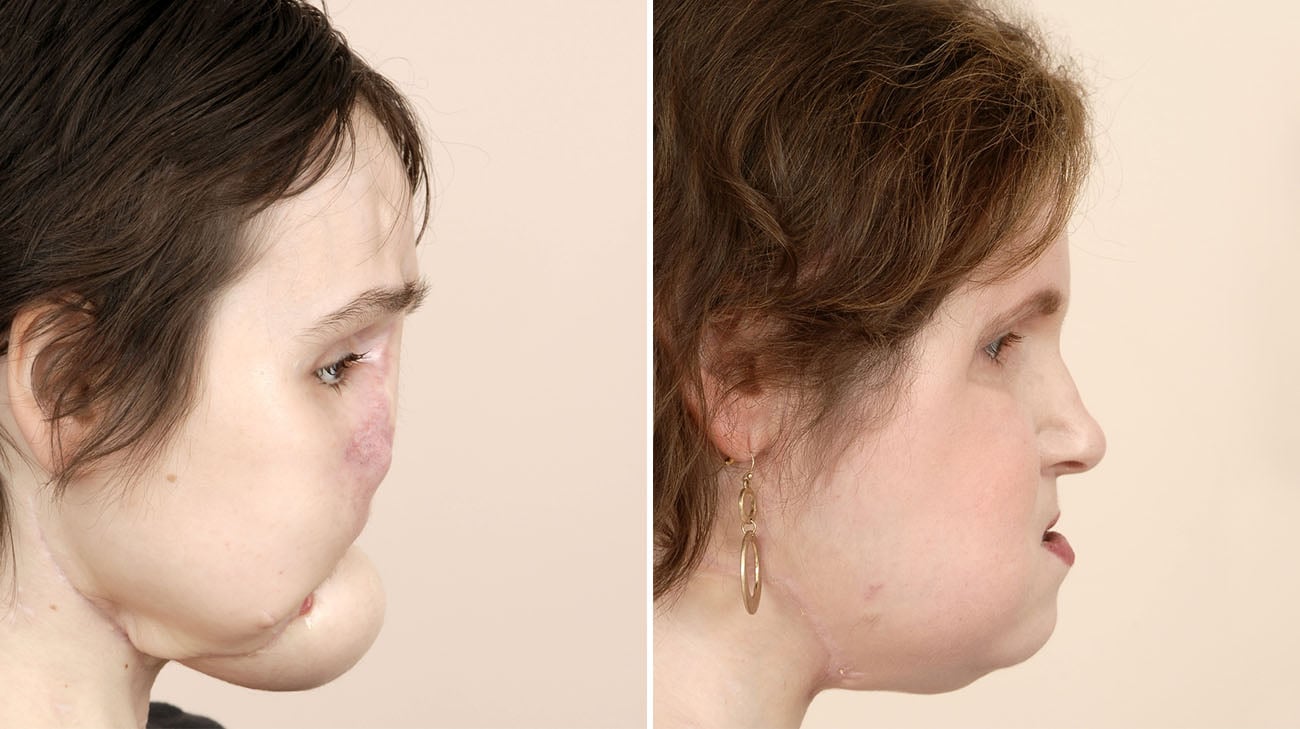 Katie Stubblefield before her face transplant in March 2015 and after in August 2018. (Courtesy: Cleveland Clinic)

Sped by ambulance to a hospital in Oxford, Miss., Katie was quickly intubated with an endotracheal tube and placed on a ventilator. When her condition stabilized, she was flown the 22 minutes by helicopter to a Memphis hospital with a Level I trauma center.

By the time Robb and Alesia arrived, by car, a half-hour or so later, Katie was already in surgery; it would be the first of more than a dozen operations she would receive in the ensuing years.

“The surgeons were very matter-of-fact with us. No gloom and doom, but no peaches and cream, either. One of them – an elderly gentleman – said it was the worst case he’d ever seen,” said Robb.

And then the physician used a phrase Robb had never heard before, in all his life.

“He said, ‘Outside of a face transplant, I just don’t know.’”

“And I’m thinking, ‘Face transplant? What is that?’”

Five weeks later, in early May 2014, Katie was flown to Cleveland, Ohio, and admitted to Cleveland Clinic.

Robb and Alesia also accompanied her to Cleveland, and they haven’t left since.

Soon after Katie’s time in Memphis, the opportunity for her to be transferred to Cleveland Clinic – ultimately, for a possible face transplant – emerged. On a Sunday morning, the family met Brian Gastman, MD, who would become Katie’s primary plastic surgeon and a member of the face transplant team. Robb described him as a ball of energy, who came to their meeting armed with a 3D image of Katie’s head.

“I’m seeing inside of my child’s head. Everything. The wound area, her bone structure. It was fascinating.” They also learned face transplantation was the ultimate goal, but it would be “way down the road somewhere,” said Robb. To get there would require many preparatory procedures including a jaw reconstruction surgery, using bone from Katie’s leg and a metal prosthesis. 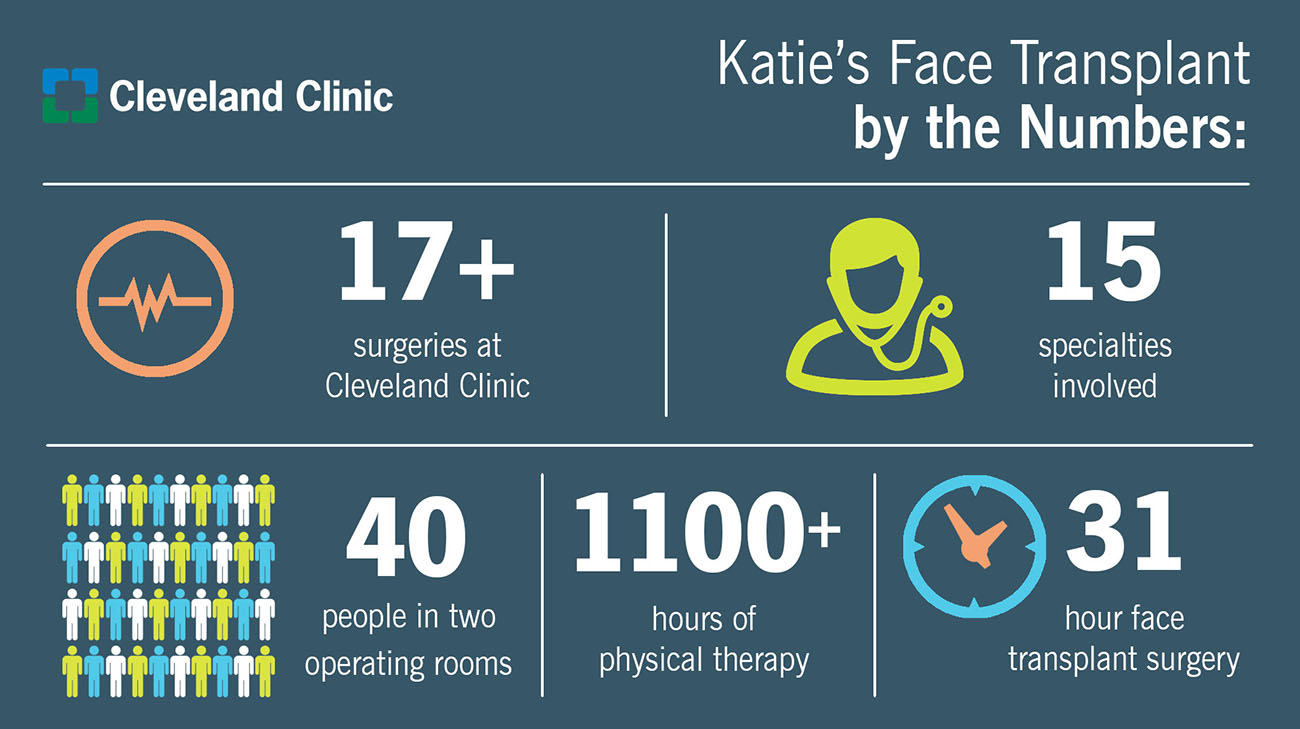 Throughout this process, Cleveland Clinic psychiatrist Kathy Coffman, MD, was a key specialist.

Dr. Coffman has counseled all three of Cleveland Clinic’s face transplant patients, typically starting a year before the surgery and extending a full year or more afterwards. As she has written, “Facial transplantation combined with the right psychological care can enable (patients) to reclaim their identity, reestablish their social contacts and ultimately get their life back.”

As Katie inched closer and closer to the possibility of a full facial transplant, Dr. Coffman would gently prod her with questions, to ensure this is what Katie really wanted.

Alesia vividly remembers one of those conversations: “Dr. Coffman was speaking about all the risks involved. Katie let her finish, and then she says, ‘I still want to do this, Dr. Coffman.’

‘I want to be able to go out in the world. And not be looked at like this.’”

Katie signed the consent forms for facial transplant surgery in November 2015. It would be another 18 months before she would be physically and mentally prepared – and the search could then begin for a suitable donor.

It would prove to be a difficult process. Because of Katie’s small stature, and relatively young age, the potential donor pool was smaller. And even smaller because the majority of available donors are male. Additionally, the donor’s other organs would possibly be used for other patients with more life-threatening conditions, meaning they could take precedence over a face transplant.

“My biggest concern is getting her the right donor, one that is really appropriate for her,” Dr. Gastman said in an interview, months before the transplant. 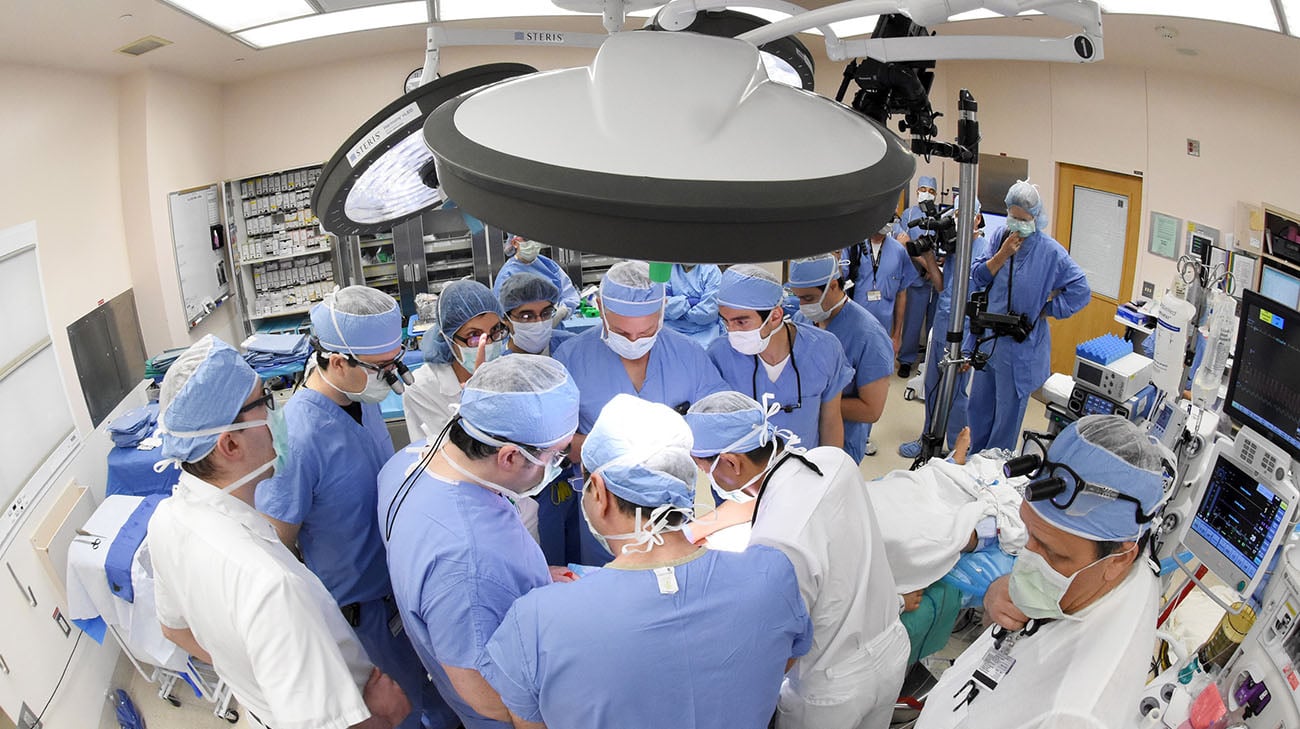 As her primary team readied her for surgery, the face transplant team conducted numerous practice surgeries – some using an innovative technology called HoloLens, a self-contained mixed-reality computer headset that allowed the user to see holograms of 3D images of Katie’s head. The technology allows surgeons to virtually practice aspects of the surgery, prior to entering the operating room. 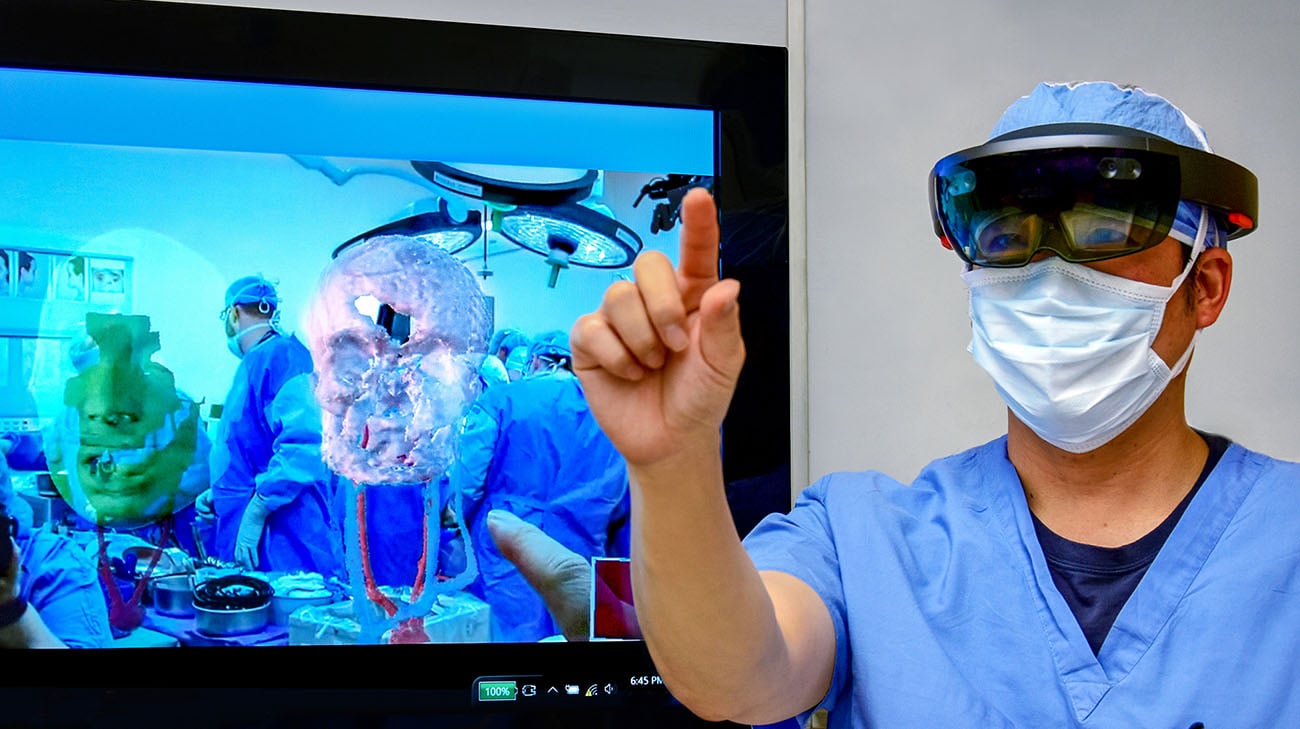 “We deliberate and discuss and respectfully argue, about what we should or should not do for Katie. It’s very complex, and every face transplant is unique,” said Dr. Gastman. “If something is going to increase the risk to the patient, we have to decide, is it really worth it?”

From the moment of Katie’s arrival, the team had the end goal of face transplantation in mind – as facial reconstruction alone would not correct her facial disfigurement or improve her quality of life. Thus, during her preparatory reconstruction surgeries, the surgeons were able to safeguard any potential blood vessels that could be used for the transplant. 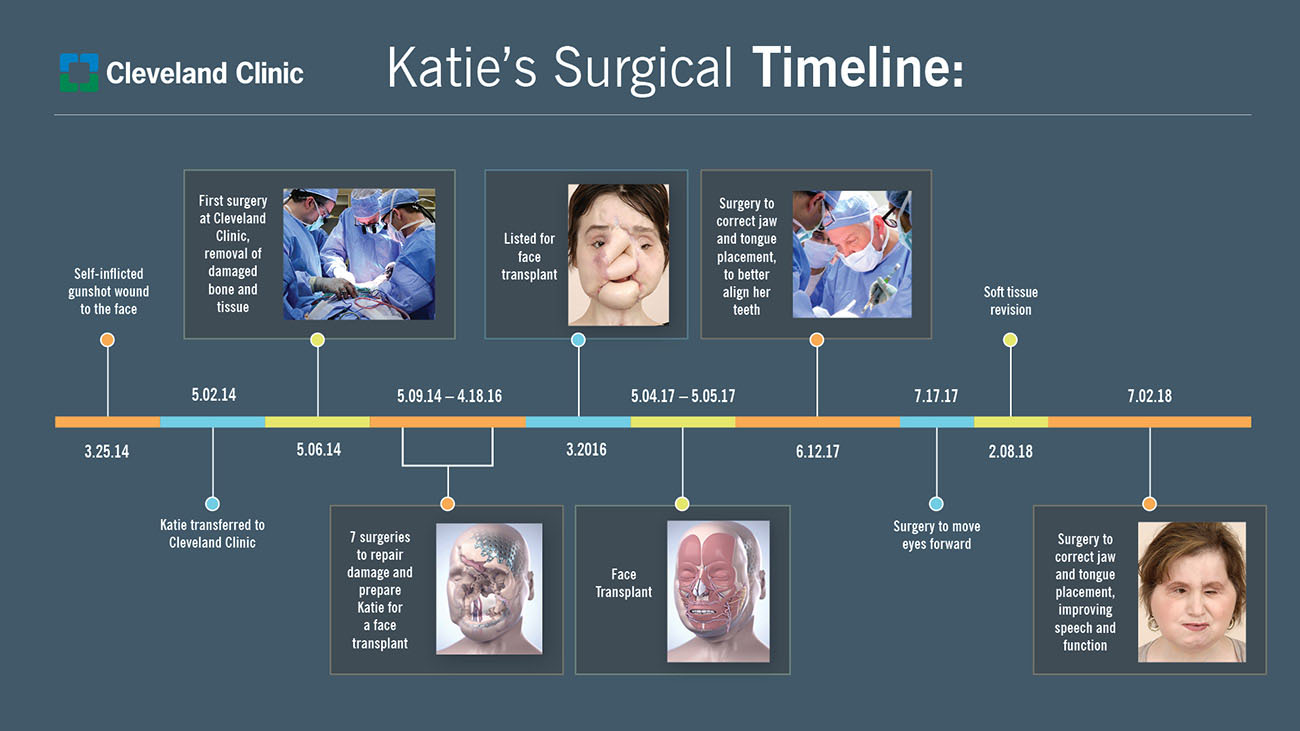 “Plastic surgery is about restoring form and function,” said Dr. Papay. “Function comes before form, and prior to the face transplant, Katie had extremely poor function and form.”

A face transplant was the only option to truly transform her life.

It would be three years to the day Katie arrived in Cleveland that Cleveland Clinic doctors would receive a call for a potential donor. That donor would ultimately be Katie’s. When the day for surgery arrived, Katie was ready. And her “longest nap ever” began.

At various points during the 31-hour procedure, Drs. Papay and Gastman would leave the surgical suite armed with photos taken during the surgery to discuss next steps and options with Robb and Alesia.

As Dr. Papay explained, “We were well prepared. But we knew our game plan could change in the middle of surgery. And that’s what happened. We ended up using more of the donor’s face than we originally planned and went to option B about halfway through the surgery,” which would increase the risk but improve both the form and function of her face. 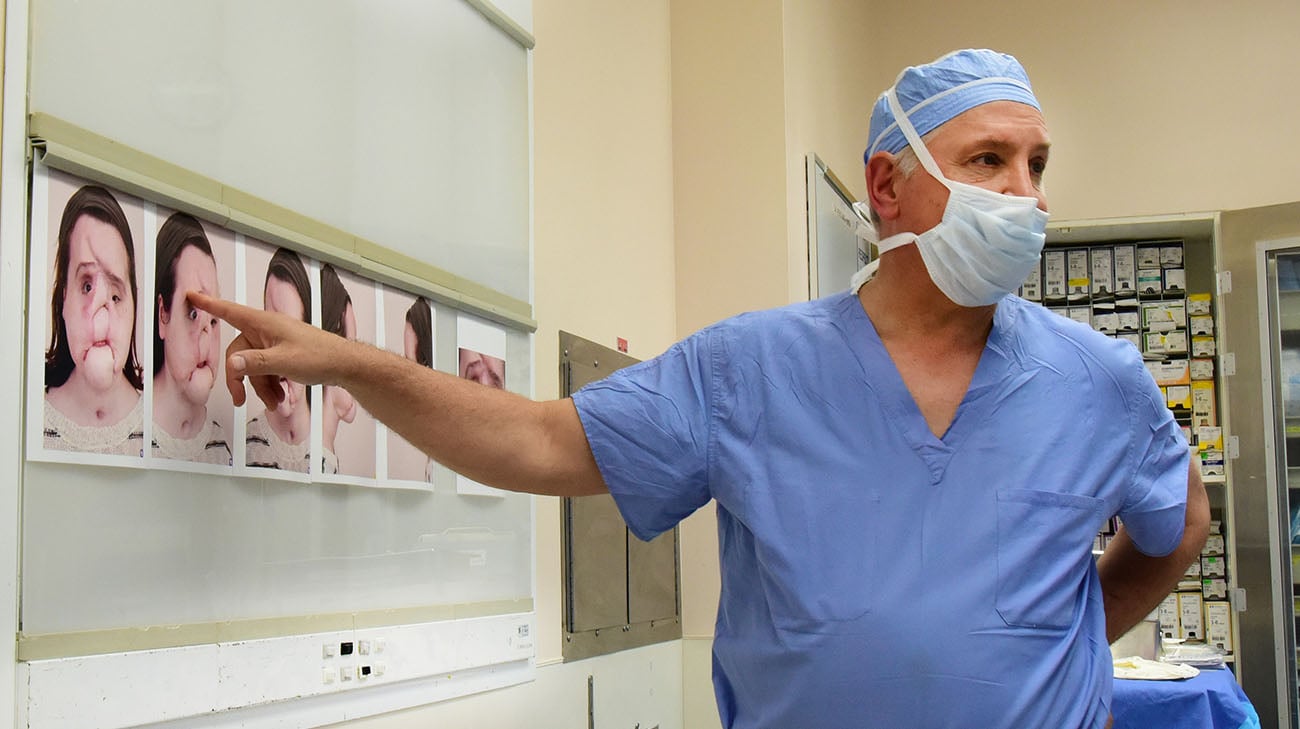 Alesia remembered at first she was shocked the medical experts would ask her opinion. But she ultimately appreciated she and Robb had a role in weighing options and making some of the decisions, as the choices would have aesthetic implications that would also increase the surgical risks.

“I kept thinking, ‘What do we think Katie would have wanted to do?’” said Alesia. Rob added, “At some point, someone said, ‘Katie would want us to go all the way.’ And it clicked in. We knew what we had to do.”

Ultimately, with option B, doctors effectively replaced 100 percent of Katie’s facial tissue with the donor’s, from mid-scalp all the way down to her jaw and neckline. Further, her upper jaw and the area beneath her orbital floors, as well as two-thirds of her lower jaw, are bone from the donor. One of the trickiest parts of the surgery involved her vascularity, ensuring blood vessels remained functional and sufficiently carried blood throughout her body.

Including her face transplant, Katie has endured more than 17 surgeries at Cleveland Clinic. Collectively, those procedures have given her the capability to breathe, chew, and swallow more effectively. She’s also able to use her face to better express emotions. In addition to significantly improved physical function, Katie is on the way to having enhanced physiological, psychological, and social function.

On reflection, a year later, Dr. Papay calls Katie’s transplant a success. She has not suffered any signs of rejection, or side effects from being on immunosuppressant drugs, and a series of subsequent operations to fine-tune certain areas (including her tongue to improve speech) have gone as planned.

Beyond the medical triumphs, he is certain Katie would not be on the verge of a new life if not for the constant support of her parents, siblings and extended family. “In addition to the physical trauma that Katie went through is the emotional trauma they all suffered,” Dr. Papay stated. “They are about as resilient as you can be, and I am proud of them as much as I’m proud of Katie.” When speaking of face transplants doctors aren’t sure what the future holds for these types of surgeries, including the possibility of hand transplants and uterine transplants. To date, most U.S. face transplants have been paid for by the U.S. Department of Defense’s Armed Forces Institute of Regenerative Medicine I (AFIRM I) grant program, which is designed to help improve the treatment of U.S. service members wounded on the battlefield.

“Will third party government and private payers support these patients that are in desperate need of a transplant?” Dr. Papay asked. “The key for (the future) is the source of financial support in these cases.” 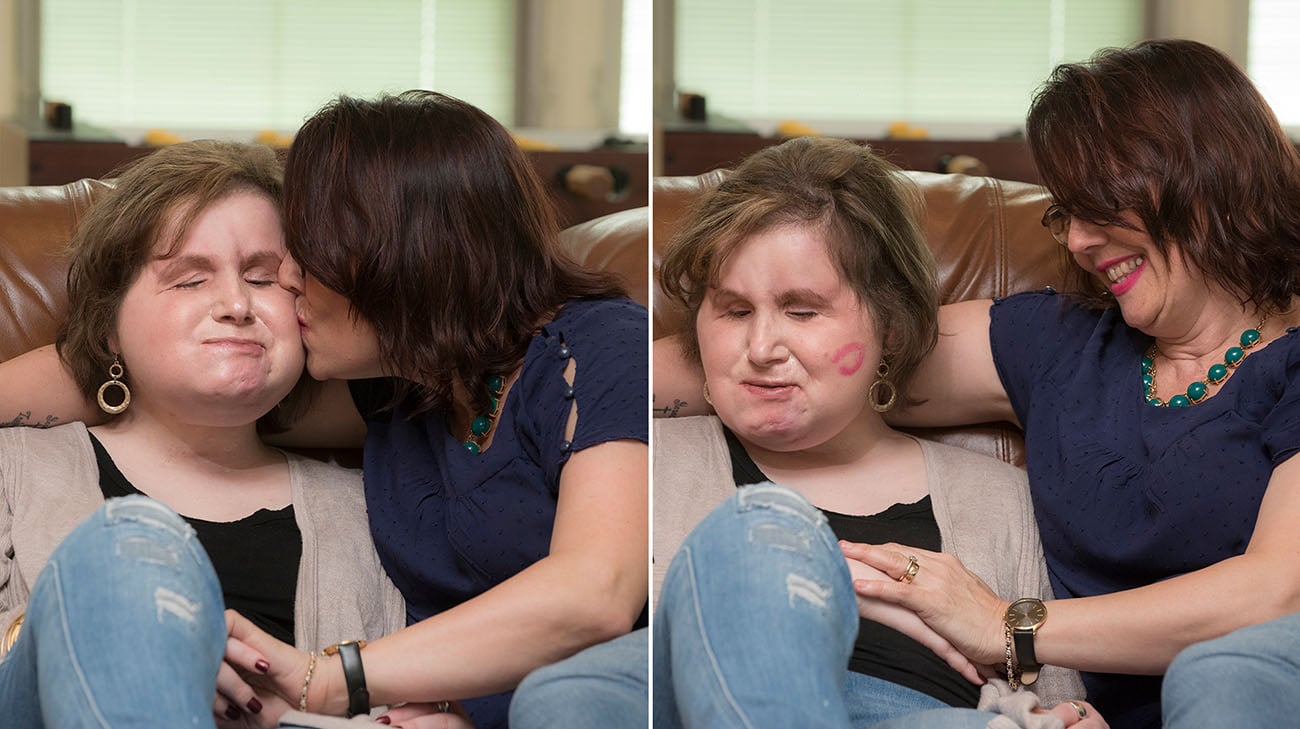 In a statement Katie prepared for the media when her face transplant was complete, she spoke of her gratitude to everyone involved. “I am forever grateful for the care this hospital has given me and continues to offer on my journey of recovery and healing,” she stated. “And to my donor and her family – words cannot express the appreciation I have for this incredible gift. With a grateful heart, I say thank you to all who have made this possible for me.” 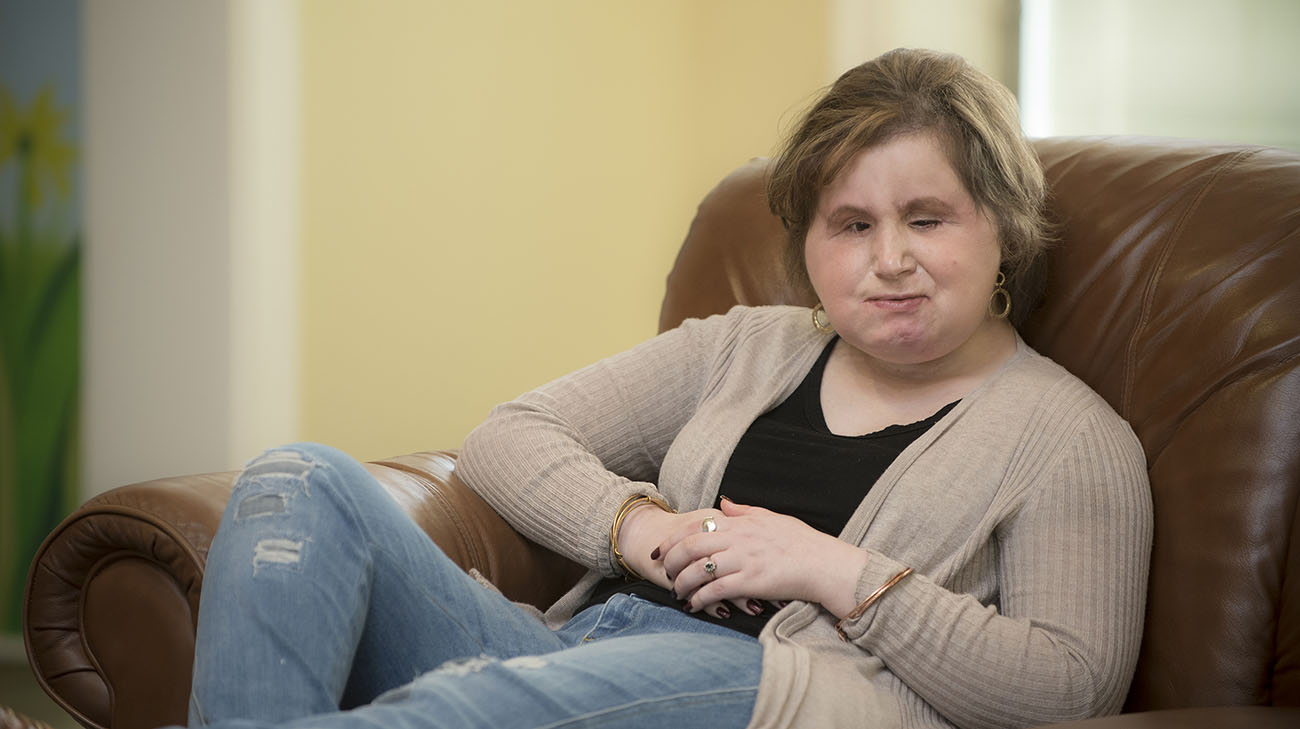 In the future, Katie wants to help others by possibly becoming a teacher or counselor. (Courtesy: Cleveland Clinic)

Alesia believes in many respects, Katie is just beginning her journey. “I don’t know how exactly, but I know Katie will help people. I feel in my heart she will as a mom. I just want Katie to enjoy life and make a difference in society. And I want her to be able to be independent.”